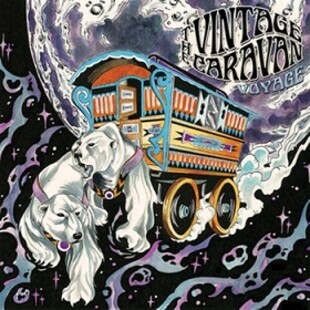 The Vintage Caravan are Icelandic upstarts who have been together since they were twelve, feeding off their parent's vinyl collections. Judging by their promo pictures that was only a year or two ago, but apparently they're now in their late teens. Looking at the pictues closer, one of them resembles a very young Lee Dorrian, which is a canny way to gain your doom credentials.

Perky enough to avoid being submerged in the mire of Sabbath-unoriginality, with bright guitar soloing, Voyage sits on the border of the recent retro doom phase, teetering close enough in to gain that cult association, but also with a lighter touch that potentially opens them up to legions of older Classic Rock Magazine reader types, for better (exposure) or for worse (my personal musical preference). A far less doomier Kadavar, like Graveyard raised on a more generic classic rock base than their stricter Pentagram diet.

So where does the balance lie, and more to the point, for all their potential, how to judge Voyage and not the band as a whole? The ballad-ish Do You Remember? is the case for the prosecution, slickly and sickly dull. But the punchy Expand Your Mind, the riff in The King's Voyage (the best track here), and the rocking Midnight Meditation provide ample alibi in defence, just about tipping this into overall positive. And let me not forget, that's based on my musical preference alone - plenty will find this whole package desirable.

Voyage is passable (if I'm being harsh) and/or enjoyable (if I'm in a good mood), not the classic it is being touted in some places, but worth checking out. And in inevitable conclusion, for a band so young and unquestionably talented, they are most certainly ones to keep an eye on, with potential unbound.