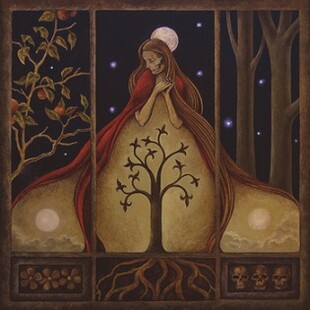 Mountain Witch hail from Germany, play doom rock and are not to be confused with Witch Mountain, who hail from America and play doom rock. Which they will be, and I did do. Further highlighting the ridiculousness and knowing narrowness of the band name pool within stoner rock.

After an almost early Iron Maiden style galloping instrumental opening track, Cold River settles into it's niche of 70's doom romanticism. Two things stand out from first run through that endear you to it - the lethargic slow pace, a weed hazed refusal to ever get moving creating a nice doped feel, and a slightly choppy feel to the production, not cleaned up even taking into account the presumed desire for retro fuzz.

Black Sabbath worship is the name of the game, and it's done very well. The path to Iommi's door is of course well worn, and it does get a bit much - too close - here at times; see the obligatory Children of the Grave reminders thrown up by the intro to The Covey for example. But it doesn't grate and the vocals don't ape Ozzy nor are overblown, something that significantly dinted my ability to enjoy the Horisont album of 2013, an interesting juxtoposition to here.

Inevitable comparions to Kadavar arise, initially due to nationality but also in direct musical resemblance, arguably outranking Abra Kadavar in the "German retro doom album of 2013 poll" of my mind, although lacking their sense of fun, which I suppose some may find as a positive, more respectful. It certainly puts 13 to shame, although that's probably a bit unfair.

Retro, proto, 70's doom, whatever it is called, is arguably fast becoming a flooded sub genre. Mountain Witch hold their heads above the water ironically by holding a tighter line to the Sabbath template, but most of all, to put it as simply as is possible, by creating good songs (see School of Night in particular), showered in that stoned vibe.

If you've been won over by this modern yet nostalgic trend, but are feeling tentative in checking out the lesser known uptake due to the sheer volume, then I'd be happy giving you assurances you'd not be wasting your time with Cold River, beautiful artwork n' all.