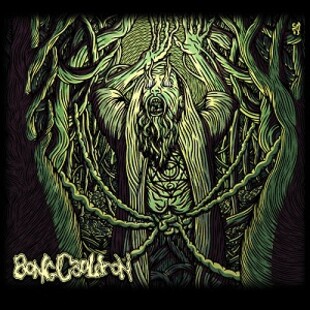 Leeds has always had an enviably fertile underground, thankfully extended recently to doom and sludge, with the likes of Wizard's Beard and Tree of Sores blackening the hardcore kids at the Fenton, Brudenell and beyond. BongCauldron are the latest band spat forth from the Yorkshire shadows, teaming up here with the increasingly impressive Superhot Records for this EP release in early 2014.

Tree Wizard sets the tone immediately, a beefy sound cloaking you in a wall of noise, giving all the available throttle to fully power the ensuing sludge attack. Pissed Up is equally towering, with groove running through it like a stick of rock. Variety comes with the central and best track Vehemence, beginning with an almost grindcore velocity, it cools magnificently to head nod sludge rock, before reinventing again with an instrumental riff ending that Karma to Burn would be proud of. Add in the relentless doom riffage of Gimp Jig, which never lets up nor wavers from your attention despite its 12 minute plus length, and the doomy roll of closer Gauze Rite (probably the weak link here but still good) and you have a great all round EP.

Produced with weight, it gives it a surround sound claustrophobic aura, like listening to Sleep on your earphones down the front of a Buzzov*en gig. On first listen, put on in the background, I worried that the metallic barrage was a burden but closer inspection revealed that it thankfully doesn't lapse into lunken headed "Southern" chuggery, mixing assault with restraint and occasional subtelty in the tempo changes. A highly recommended start to a potentially explosive year of doom releases.