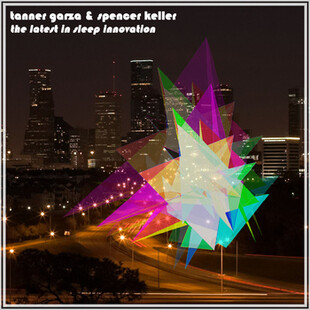 Tanner Garza and Spencer Keller from Texas and Oregon respectively, came together having had solo projects themselves; Black Leather Jesus from Houston, TX and Something Funny is Happening from Portland, OR.

I interviewed the duo following the release of 'The Latest In Sleep Innovation' their first EP together.

Ari: Tell us how you first got together?

Tanner: Indeed. There is a whole weird story I could share about how small of a world it is because of Jamie.

Tanner: Well, I have a noise duo called Uncle Meat. When we release I first tape in 2012 we sampled a lot of "The Young Ones" and Mr. Jolly Lives Next Door". Jamie found me posting about it on Tumblr and we struck up a quick friendship. I was always a fan of weird glitch art and he suggested me checking out the "Something Funny Is Happening" blog. Thus, me and Spencer became friends.

So far, Jamie has done two music videos for me. One of the best visual artists out there as far as I'm concerned.

Tanner: Well, it's less a "band" and more just something we wanted to do!

Ari: Was it instigated by one party in particular or a mutual combination?

Tanner: I asked Spencer, initially. I was a bit surprised that he agreed.

Spencer: Pff, I was surprised you asked!

Tanner: At this point, I'm still surprised when people respond at all, let alone agree to collaborate!

Spencer: I got really into Tanner's tunes after we met, his more ambient stuff was massively influential as I started making more somber crap. It inspired me to start fiddling with tape loops. I was ecstatic when he approached me.

Ari: How did the EP come about in terms of production? Long-distance relationships usually spell difficulties.

Tanner: We both have a different ways of producing. Whereas my process is mostly analogue technology (Hand-cut tape loops, pedal manipulation, minimal post editing), Spencer mostly works with software, I believe.

Spencer: Well put. I think the EP came about really well, a lot speedier than when I typically get shit done on my own, which is refreshing. I'm dipping into the hardware aspect more and more, but yeah I agree, more software on my end.

Tanner: Which is fine. I can't stand those snobs that think working on a computer is a lesser art-form or some shit. The same noiseheads that use a bunch of pedals and TV static. Pretentious cocks.

Ari: Do you plan to do anything together in the future?

Tanner: I would hope so. It's nice to bask in how people respond before rushing to put together more sounds.

Spencer: I'd certainly like to work together more, but yeah, same, would be nice to get some feedback on what we just put out there.

The first fade in of No One Is Completely Unhappy At The Failure Of His Best Friend is an epidural, the pulsing melody slowly turns a darker shade, and the littering of spiky crackles intensifies like tiny like hyperdermics to the brain. If you're one for ASMR this is designed for you. It is rare or a drone record to hold your interest all the way through, however this track is constantly evolving, but it keeps that minimal feel we all love in this genre.

Counting Carpet Fibers, You Let It Burn To The Ground I was going to say is probably the low point of the EP, but having listened for a third time, I think it's highly improbable or almost difficult to say. It's definitely like the forgotten middle child, different and a little understated. The proggy bubbley tones that sweep throughout are fun, maybe it's a little too cheery, and I'm a miserable cunt. Though comparing cheeriness on this record in whole, is like comparing Jack Dee to the Jonestown Massacre.

Now, if I could stick my cock in music This Ricola Tastes Like Snozzberries would be the poor hole for me to fill. It had me in a euphoric trance throughout. The definitive drone track of 2013, easily. Does everything you want from a drone track. Buzzing in the back of your cranium, itching mind and static electic waves down your neck and across the shoulders. People pay good money in La Chambre for shit like this.

The title track from the EP The Latest In Sleep Innovation carries one from where the last track left. An intense ride from the get-go and it won't let you get off, ever, well, for four mintues twenty six seconds. Then it's time to get back in the queue and ride that fucker again and again and again and again; until the park guards kicks you out, wailing, dragging you by the ankle, covered in melted ice cream, diet coke stains and puke.