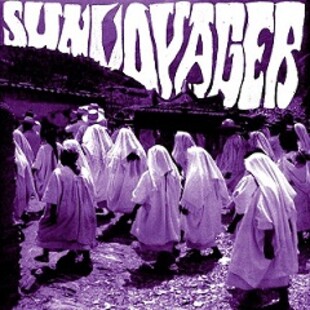 I reviewed Sun Voyager's first demo, Cosmic Tides earlier this year. I noted then that the restriction to three tracks allowed casual listeners passing by to get a flavour for the band - it seemingly also allows for regular output, as demonstrated here with Mecca, their second demo of 2013. As before, this is a short triple outburst, easily digestible, and again enjoyable to sit through.

Their sound has changed subtely in the months since I last reviewed them - less garage, more space indie rock. There's a Dead Meadow esque sheen clouding their atmosphere, a slight drop in tempo and the songs are longer in general. Middle track, Space Queen is the best here, containing a nice vibe throughout, traversing the tightrope of Wooden Shjips hip indie cool and space stoner rock. It has that repetitiveness, which cynics would say call aimlessness, but when applied through the hazy filter of psychedelia lends a sense of entering a trance as you mellow to it's grooves. It's impressive stuff. The other tracks offer similar fare, although a tad formulaically (with the title of the third sung slightly annoyingly too often).

It means it isn't incredibly strong throughout, but the change suits them overall. Here's to the next release sometime early 2014, in the mean time check out Space Queen via the link below.