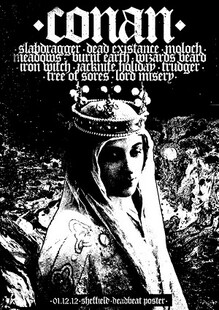 Seventy five bands that I can roll out in text in five minutes, without need for reference to reviews, gig listings or playlists. And there's plenty more (indeed, apologies to those I've missed out). A stellar, multifarious and exhilarating grouping of talent with two things in common - all are doom bands, or doom affiliated to differing levels (depending on your opinion of genre boundaries), and all British bands that are or have been active in 2013. What is remarkable is the speed at which this scene has blossomed to become a musical force of underground talent that rivals anything at home or abroad, across the metal axis in terms of momentum and vibrancy.

How the scene has ballooned so spectacularly is something of a mystery - only 3 or 4 years ago, there was a mere fraction of the scale of the list above. Charting it back to when I became aware of the deeper trenches of the UK doom underground, in the late 90's, early 00's, my impressions then were of bands created by members of the hardcore scene of the 90s, 'retiring' to the slower, denser throes of doom, in the grand tradition begun by Lee Dorrain and Bill Steer (Napalm Death to Cathedral and Firebird respectively).

From their old haunt of the 1in12 to the Old Angel, post Iron Monkey, doom and sludge was overarched by fuzzbastards including Mistress, Murder One, Charger, Lazarus Blackstar, Dukes of Nothing and Black Eye Riot. The music was scuzzy and vitriolic, the bands seasoned punks in a seemingly tight knit scene. But the genre plateaued, with many of the bands splitting up or becoming largely dormant, and the uptake of their mantle was slow. 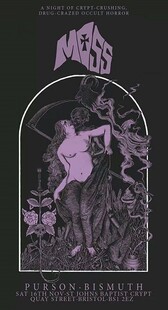 The mid to late 00's saw fresh faces emerge to give the scene new blood, but it was held together by only a few bands who displayed enterprise and distinction; Agent of the Morai, Bumsnogger, Among the Missing, Berserkowitz and a decent but small London scene, all exposed to me by our launch of ninehertz and the trojan work by the likes of Sabotage promotions. Others clumsily rehashed Eyehategod, Crowbar or Iron Monkey riffs, but whether good or bad it was narrowly focussed with a sludge base. Doom away from sludge was still represented, by Witchsorrow, Blood Island Raiders and Alunah in the more traditional vibes.

There was a growing perception that sludge may have run its course, a niche genre simply exhausted of all exciting avenues, and the youthful relish at our corner of the underground was batting eyelids coquettishly at Isis, Pelican and the Hydrahead rosta (Bossk, Manatees et al). Quality was far between, and missing the innovation of the likes of Toner Low or Suma, from mainland Europe, who seemed to strike a harmony between doom, sludge and stoner - and even drone and psych - magically right, chiselling at each style to create music that at once sounded trippy and skull crushing.

Yet from somewhere, a spark ignited at the start of the current decade. Bands of interest, who trusted friends urged you to check out started cropping up all over the country. Conan, and their fellow titans in sonic extremity Slomatics, from Belfast, gained international recognition and released punishing slabs of ear melting doom to rival the might of High on Fire. It's possible that their breakthrough - the sight of Liverpool's own emerging from the once stagnant national scene - triggered the explosion we see now. 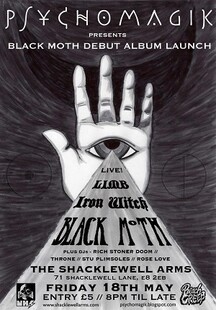 The sound became more adventurous, blending hardcore, psych, black metal and more to generate much needed variety and nuance. From the manic hardcore of Palehorse, to the claustraphobia of Moss, to Hey Colossus' krautrock musical fuckery, via the trad of Age of Taurus, the pomp of Groan and the ethereal Crumbling Ghost, it is hard to pin down to a particular sound. The mix of styles within single bands is also key - especially the blend of sludge and stoner into the doom melting pot espoused by the likes of Limb and Atragon, an experimental and electrifying edge previously untried in the UK underground as bands stuck rigidly within genre stereotypes and more metallic leanings.

However, if I were to venture one musical theme - a median of the insurgence if not an inclusive trend, would be one of grim, bottom of the stomach rumbling gloominess. While many on the continent had their heads turned by pastoral "proto-doom" Pentagram-ism lightness, Britain shifted toward darkness. Previously many bands had forged a clunkier metallic strain of doom - to use the Northwest as an example, the likes of Limbic Riot, Volition, Zangief, from the late 00's, arguably had a Crowbar/Fistula/US sludge influence, where as now no doubt the scene would develop in a more directly darker doom manner, as seen with Coltsblood, formed from the ashes of the latter. 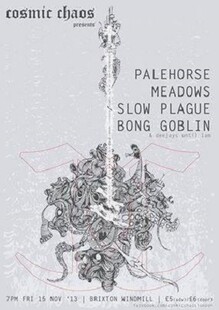 In hindsight, Ramesses and Bong were keepers of that darkness during the fallow years, with the former's Misanthropic Alchemy, vastly underrated at the time, arguably foreshadowing the current sound, and has aptly been reissued recently. Yet at the risk of contradicting myself so quickly, this darkness - reflected further in the monochrome covers and vivid grim imagery of many a download and CD I've bought this year - hasn't necessarily been matched with uber-seriousness and pretention, and that's largely down to the changing dynamic of those involved.

The demographic of the bands now forging this great scene is, on the whole, younger than the hoary types of a decade ago (with all due respect), and there's a vibrancy and vivacious enthusiasm (and dare I say, sense of fun) evident at gigs and even reaching through the ether, out from your laptop keyboard as you catch up with the latest developments. There are more women involved as well - Alunah, Throne, Bismuth, Limb and Undersmile to name just five with female members. Cynicism is gladly restrained and the old hardcore ethics of support between bands and collusion with a proactive support network are seemingly in full flow. 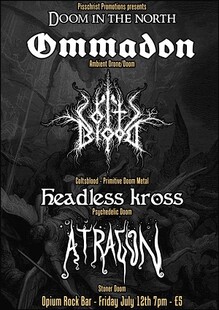 It is here too that positive developments have been forged. Speaking with Steve from Berserkowitz and now Coltsblood at a recent gig, the opportunities for gigs between when he started with Berserkowitz and now has grown immeasurably, with the possibilities of playing out of town growing by the month as enthusiastic, young new promoters have the confidence to beckon these groups to their towns. Not all of the bands in the opening inventory of this article are newly bred, but even those longer in the tooth can only have been energised by the recent upsurge. Labels such as the exemplary Witch Hunter Records, plus Church of Fuck and Head of Crom create a common promotion centre and shared exposure, while the Desertfest team has created an equal to Roadburn in the UK, something I thought unbelievable only 5 years ago.

In Chris Fielding, himself formerly of Agent of the Morai, doom has the most sought after metal producer in the land to call it's own, now operating out of the custom built Skyhammer studios. The Sleeping Shaman, once a small Manchester concern, is now internationally renowned as a source of doom reviews and news and numerous blogs (including the excellent Sludgelord) offer opinion and further exposure. The importance of the rise of bandcamp and Facebook could be mused upon here, but I've already waffled on too long. 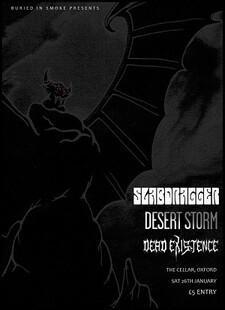 It is a bit of a chicken or egg situation - did the support structures develop to enable the scene, or vice versa. It doesn't matter, as it has all come together in perfect maelstrom to create the haven we now enjoy. It is all set within the wider picture of tell tale signs that something was stirring - Electric Wizard's rise from niche masters to extreme metal superstars in recent years; Orange Goblin winning best band in last year's Terrorizer poll - neither of whom, despite being alive and in rude health, have had a major reignition or reimagination of sound.

When I was a student in Salford in the late 90's, there were 4 or 5 local hardcore and sludge bands feeding from each other, playing practice room gigs - Ripley, Levein, Archer etc (did they call it the Salford Sludge Alliance? or have I made that up? anyway...) It has that feel of intoxication but manifestly more so and magnified on a national scale. The exciting thing is that unlike so many scenes that appear, it doesn't feel like this has mushroomed out of one particular city, town, postcode or venue, but at pockets throughout Great Britain and Ireland. It is disparate in location, yet inclusive in it's encompassing nature.

What's clear is that this is a period to be relished and experienced. Bands seemingly appear on my "must listen to" list weekly, festivals like Temple are cropping up to have Neurosis share the stage with Dragged into Sunlight, Conan have started a label to sign the likes of Bast... and all this without even going into the healthy state of 70's rock and stoner right now, from the likes of Stubb, Trippy Wicked, Grifter, Steak, Desert Storm, Gentlemans Pistols... (I'll stop now so as not to bookend the piece with two enormous lists). Doom in the UK is a burgeoning, procreative scene - success breeding success, darkness encapsulating all it touches, and we're not close to it's peak as yet.