The Slow Blade An Anthology of Bellends 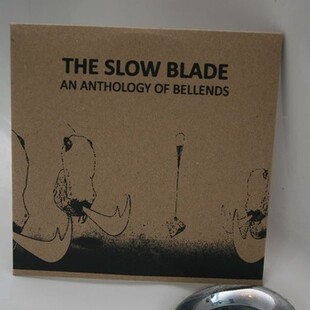 If you didn't already know, this Sheffield quartet are more or less the 9hz house band, formed in 2008 (or thereabouts) from the ashes/remnants/limbs of the somewhat heavier but no less idiosyncratic Flatlands, a band who released a clutch of demos, EPs and a near-classic album themed around Lincolnshire and its environs.

Whilst retaining many of their preceding musical features, The Slow Blade are a different beast entirely, having shed much of the metallic swell and crunch and seemingly doing away with minor chords altogether. Hell, they're almost cheery.

An Anthology Of Bellends (Botch nod, I see what you did there) is a compilation of their self-titled EP from last year, along with four new tracks, presented in chronological order. Naturally with the gap in writing and recording, to use a time-ruined phrase: it's a game of two halves.

Having dwelt beneath something of a black/death metal musical rock for the last few years myself, I can't hear much of anything I've heard before in The 'Blade's jaunty, jarring but thoroughly melodious riffage beyond a healthy dash of Minus The Bear (cue a barrage of obvious comparisons from this zine's eclectic readership). Songs like Head Below Wing and Turkish Quad Biking keen and dart from the speakers with precision and honesty. Mike Shields' vocals are a world away from his screamed efforts of old, these days adopting a passionate roar/yelp more commonly found in the emo/indie scene. And as for the lyrics, well, I could write a whole separate review of the lyrics, suffice to say they are wholly bizarre, often hilarious and weirdly, earnestly delivered; I have no idea what they mean, but I can tell that he means it.

The newer songs on this compilation, whilst slightly lacking the punch of the older tracks, continue to surprise, delivering such lyrical gems as What's in the biscuits? and something about DVD and Bluray versions of Star Wars, as well as introducing gangshouts and even a tenor saxophone, which winds its way through the closing What Version Of Windows Are You Using? (my work's Server 2008 Enterprise, thanks for asking).

A definite small spark of genius is present in these 9 tracks. With a bit more time and fresh air, this lot will burn bright indeed. And if you hear only one song about euphoniums this year, make it Big Si's Euphonium Sunday. Obviously.

Forums - Reviews and Articles - The Slow Blade - An Anthology of Bellends