Trippy Wicked and the Cosmic Children of the Knight Underground 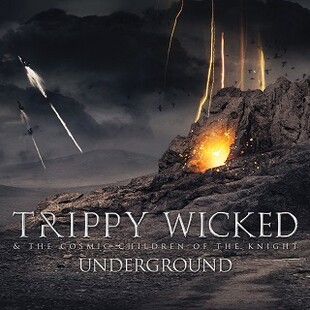 Silly name aside, there's a lot to admire about Trippy Wicked - hard working, oft touring, inventive - seemingly without ego or histrionics, they are always itching to move on to another project - be it a tour with Stone Axe, taking lesser known bands like Bright Curse out with them round the UK, providing backline to Jack in Stubb, or releasing records through their Superhot label. This time, it's the turn of a new album, which is of course news most welcome. The opening title track is magnificent - big and bombastic riffage is tempered by understated vocals and a nice rolling, head nodding repetitiveness.

Instrumental Enlightenment transitions from light to dark, slower to heavier in the manner Karma to Burn perfected. It leads into Discoveries seemlessly, so you don't realise you've moved on a song, portraying a theme of this five track album - that it at times feels like an organic jam session, where song boundaries aren't clearly defined and the trio are completely in the zone. It fades out from far out, displaying their chilled side, their subtelty proven in previous acoustic releases, and gives them great change in dynamic.

The album feels stoner rock while eschewing the obvious marks of the genre - not in debt to one band in particular (eg Kyuss), in control of the fuzz, and allowing a doom riff drone to influence with a proggy tinge. It's forceful and confident throughout, aided by a full on production. While it's quality is instantly obvious, it grows further into your affections with repeat listens. A great album by a British band worthy of attention; go forth and invest.