Hiram See The Thing Within The Thing 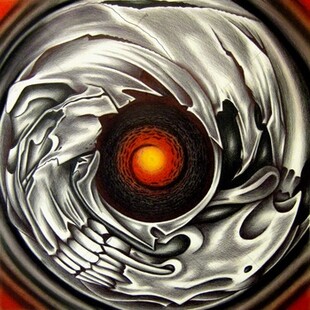 Hiram are somewhat of a phoenix, active years ago, they've rolled back into existence this year to local acclaim and I'll be diddled if I'm letting them get away from a thorough lookover from ninehertz towers.

Very much geared towards the more prog-esque end of metal, you'll need to put aside some time to absorb See The Thing....

With the opening salvo See The Thing and Winner Dies Last (Aspiration) coming in at around fifteen minutes, overarching doom chords are drawn out for your immediate delectation on See The Thing and set the scene right away. This isn't doom per se, rather a malevolent calm before the storm of Winner, beautiful, but get too close and you could end up being sucked into their vortex too soon. Once the vocals spring forth you are confronted with a pained delivery that even strays into tribalism at more peaceful parts and a creeping bassline bubbling underneath ensures the leaned-on power of the riff never lets up.

Once they get going it's like a prog steamroller, there's layers upon layers here to dissect, the screams give way to deathy grunts at points, lending it an evil edge and it's hard to know where their influences span from. Is it Cephalic Carnage with less blast, or is it Tool with a side clump of death metal? The episode of The Simpsons where Homer inadvertently becomes Mr Burns' assistant and asks: 'Uh-huh, uh-huh. Okay. Um Can you repeat the part of the stuff where you said all about uuhhh, things. Uhh... the things?' comes to mind, simply because there's so much going on.

One moment you've got a satisfying crunch of a riff happening, the next moment a stop-start rhythmical nightmare a la Meshuggah, it's just dizzying (and brilliant as it happens).

A moment of reflection comes with Respiration (Within The Thing) with some delicate and nuanced acoustics on display and it's great to have a moment to rest your synapses.

This doesn't last for long however, Conspiration has a brisker agenda, intense and technically complex. Time signatures are thrown at all angles and if you aren't of a prog bent, it will sound like over-egging the pudding. If you get off on time changes, clever twists and turns and some frankly astonishing sections of multi-tracked vocals then you'll want to take Hiram home and meet your king Crimson-loving mum.

The tone goes from black to a shimmering grey for Respiration (Calm and Deep) and a more mellow sound emerges. Clean vocals tell the story of a ship in the process of going down and it's like a more technically-aware Neurosis at times. When the vocals gain prominence, it could be Von Til screaming.

Seventeen-minute closer (yep, SEVEN-TEEN) It Can't Come Quick Enough starts off like a crooning pastiche of sorts. Sounds kind of like those ditties they sing out of a window whistfuly on a 1950s musicals and seems a bit out of keeping with the rest of the record, but the noodling behind it shows a Floydian bent, so outweighs any notion of it being a cheese-fest. Then there's the parting of the waves, a spindly, mirror-image of a riff creeps in and it leads to the band crashing back into darker waters that we've seen elsewhere.

Overall, you'd be at a disadvantage not hearing this. It feels like a concept album on self-reflection and perhaps exploration of the ego, the id, whatever you want to call it. Then again it could be just several highly creative minds from South Yorkshire getting together for some serious jammage. Whatever, keep your (third) eye open for Hiram, it'd be a shame to miss them.

Forums - Reviews and Articles - Hiram - See The Thing Within The Thing