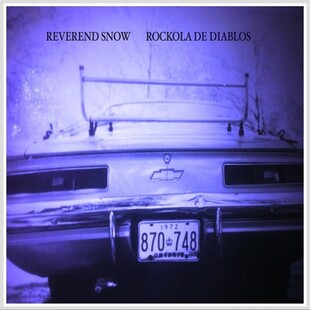 From the car on the album cover to the Stoner Rock Band Name Generator band name, even if it's admittedly one you'd discard quickly by hitting the button once again (ace, I just got Dope Boulder...oops, distracted), it's clear where Reverend Snow pitch their tent.

Yep, it's stoner rock, and even I admit that it's a sound that's being strangled of new influence and spark, which is a bad sign. I still hold the hope that the next new thing I hear claiming the genre title will reignite the passions and re-jig the old in an exciting manner, such as, for example, Truckfighters' Gravity X did a while back now. Rockola De Diablos isn't the answer I'm afraid.

Opener Payment for the Wizard sets the tone and is symptomatic of the the whole album - it's alright, but no more. It's stoner rock with doom flecks, reminiscent of fellow Canadians Sons of Otis at a stretch. Nothing reaches out and grabs you, and the vocals are distorted as if radioed in. The production doesn't help at times on the album, burying the better riffs under cymbal and distortion while allowing the plodding riffs more freedom.

And there are definite moments of plodding bar rock here and abouts. Not just with the recycled riffs but the song lengths - way too many tracks should end after three minutes but go on and on needlessly. Time control is a problem here. On the plus side, there are distinct Fu Manchu influences appearing from second track Vaporizer onwards, which could be an Eatin' Dust outtake, while Override could be from the very early Fu catalogue. Again, both songs outstay their welcome.

It gets a bit spacier thereafter, a bit Kyuss' Wretch at points too. The vocals, while not terrible or instantly dislikeable like so many stoner band of yore, are fairly standard - while trying to be generous I imagined up likens to Jay Jarosz (vocalist on Karma to Burn) or Wino, but without the emotionally detached drugged drawl of the former nor the lordly gravitas of the latter.

It gets better as it goes on and there are glimmers of potential in the future of Revered Snow, but the search for the reignition of the fires deep in the soul of stoner continues.