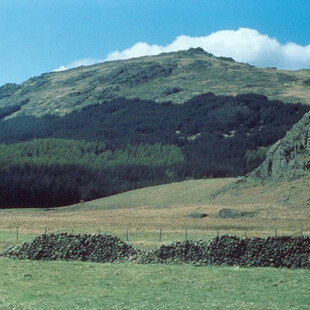 ten are an ambient and experimental band from Leeds who have gathered their unreleased recordings from 2010-2012 together to bring you Demos on tape.

Composed of folk and minimalist electronica you'll have to be in a contemplative and relaxed frame of mind to truly take them in. Untitled, each track takes up just a whisper of space, strained strings layered upon subtle guitar almost-sounds and hardly-there percussion.

The music sounds close and intimate, as if it is being played incredibly softly just metres away. You can almost here the incidental noises that come from instruments simply being played, a focus on the minutiae of music, close up and vital.

Suggestions of samples break through under some tracks, clicks and scrapes underpin the starry, far-reaching guitar lines and that sense of being close to the music and hearing every sinew of muscle move stays with you throughout. Live, this kind of release would no doubt require audience lockdown, even moving to scratch your nose or replace coins in your pocket must seem like a bull in a china shop. The squeaks of the fretboard and the almost uncomfortably quiet samples only seek to exploit that.

You might have trouble listening to this release for too long as it requires, no, demands your attention and to simply have it on in the background seems like doing it a disservice. This would work as an installation piece too, in a whitewashed room with stark, exposed floorboards with perhaps wiry figures drawn in fine lines adorning the walls.

Like listening to your own blood pump through your ears through a sea shell, ten is a group which requires you connect with it on a personal level.