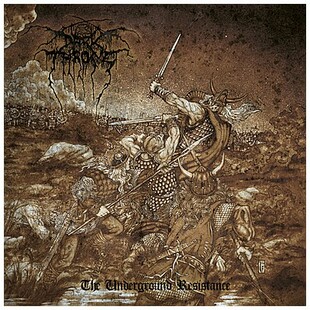 Darkthrone always remind me of my discovery of black metal. Raspy and truly evil-sounding stuff like A Blaze In The Northern Sky revealed a world where hands turned into claws, mouths could be painted in permanent grimaces with badger paint and saying pretty much anything with a croaky voice could sound grim and menacing.

Good then, that Darkthrone have stayed the same, not to the purists, but to me they still sound as original and naive as ever. They seem to have come full circle, playing their simplistic and primal material just as fervently, just as ham-fistedly but with a classic NWOBHM influence. On each track's page in the accompanying booklet, Messers Culto and Fenriz explain where each chorus and solo come from in their record collection and it's almost like piecing together an album from classic metal jigsaw pieces. Heartening that two grown men can still feel so inspired as to pay tribute to their idols but actually still creating something wholly new.

Tracks like Valkyrie are full of fist in the air machismo and testosterone, all of which is delivered through trebly and fuzzed-up guitars. The pair take turns pretty much to deliver vocals on alternate tracks and frankly they've probably been hiding their light under a bushel. Fenriz for example has an excellent falsetto like on Valkyrie while Nocturno Culto can do an excellent impression of King Diamond, as you can hear on Lesser Men. I keep expecting him to start talking about the King's often-cited Grandma, but alas, no blue rinse for Darkthrone.

What's actually great about this is you can just forget this is the band that brought you grim and po-faced albums of yore and revel in the classic metal worship. The lyrics are great and I've had to prise this out of my car stereo to review it indoors as it's been on regular rotation. The 80s metal canter of the guitars and drums has been incredible driving music, particularly through the recent late snow we've been enjoying in the UK.

You'll have to stifle a giggle in parts on The Ones You Left Behind as it's very cod-metal, apparently channeling the year 1984 according to the liner notes. I was born that year so perhaps it's about the Miners' strikes or Margeret Thatcher, who knows? All I can tell you is the vocals are a bit too Welsh voice choir at times to be taken seriously, but I suspect the pair don't care. At all.

The ridiculousness continues with Come Warfare, the Entire Doom with Nocturno Culto doing his best soothsayer impression which is quite honestly fantastic. You can imagine a gnarled finger appearing from under a cloak as he delivers lines like You are not welcome here/Scraping on the door but it's sealed/The false agenda/Biting its tale.

The best modern black metal song that's actually aping old black metal songs closes the album in the form of Leave No Cross Unturned. The vocals here are something to behold and there's even a reference to A Blaze In The Northern Sky with some of the spoken parts towards the end. To make such a catchy and at the same time misanthropic song is actually quite impressive too, you'll be singing Leave, no, leave no cross unturned in the queue at the band tomorrow. This is practice room fodder, heads down, air flailing and fists in the air.

Darkthrone you mad bastards, this is unreal.