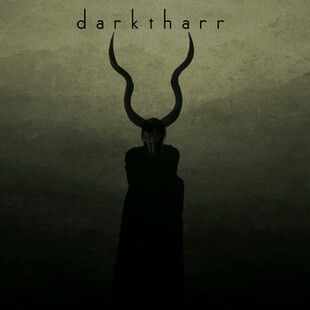 When something appears with such dark imagery as Dark tharr's CD has, I get worried.

Is it nihilist black metal pedaled by a lone bedroom misanthrope again? Is it some teenage death metal? My hopes are often close to extinguished if I see a hint of goats, skulls or mysterious solitary figures these days. However, Dark tharr's lone goat skull man brings us some (skull)cracking doom and for this I am glad.

Coming straight out of Freiburg Germany, this five-track effort has that fist clenching and desperate groove you long for when people detune as much as this. Dark tharr are a 3/4 female proposition too, with just their bassist being able to grow a beard, I hope. This of course is nothing new, the likes of Monarch! and Thorr's Hammer have made it easy for women to bring the misery just as fat as men do. The vocals for example are the low, gravelly roar of a woman wronged it seems, satisfyingly croaky and throaty like.

The riffs wallow in that Eyehategod pool a fair bit, blues-influenced but so blue it looks black. The guitar has that tone that rings out over the nullifying bass work so many bands forget about. If I hear one amorphous blob of feedback and lack of clarity once more then I might, you know, get really angry with someone and have an extra biscuit or something. I don't do the angry thing very well do I? Well thankfully Dark thaar are here to reflect my mood, sombre and elemental.

You'll have heard this kind of thing before, but it's rare to get something so steadfastly proud of its bone-crunching simplicity that I've sat up and taken notice and you totally should too. On the off chance you're reading this in Germany, they appear to be rather deafening live and are playing with some amazing bands at the moment, Black Shape of Nexus for example. That tells you a lot about them to be honest, they're keeping excellent company. Listen you bunch of worms.