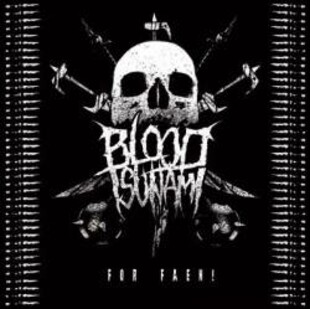 The last Blood Tsunami album was in 2009, this Norwegian bunch of thrashers are now back together and it's almost like they've never been away. For those not aware, BS are what Slayer should sound like these days, pissed off, mean and relentless. There's no room for complacency here, it's all breakneck head-banging stuff, think Exodus minus the silly vocals, early Darkthrone with some good production and crushed beer cans against heads rather than gesticulating in dark forests.

For Faen translates roughly as 'for the devil' but the band claim it can also mean 'fuck' in English. That's generally the word you'll be saying over and over as you hear this, marveling at the sheer brass neck on it. There's hardly an original moment on here, but you'll be too busy thrashing away and spilling beer to care. Solos peel out now and again at thundering intervals and the vocals are peppered with Tom G Warrior exclamations as well as some killer lyrics which all sound incredibly pissed off. This is the kind of record that should probably be taped badly onto a D90 and rammed into an old Nova's deck to play whilst thrashing it down the M1 to some denim-clad show in a pub back room. This makes me want to get drunk and jump on things.