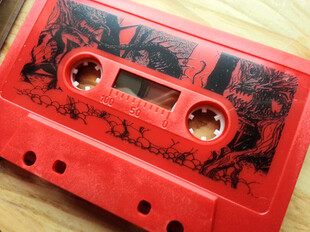 Burning Witch, Earth, Sunn0))) and their ilk have a lot to blame for. A million bands tuning their axes to flopping cables barely able to be processed by pickups have abounded for years so it takes something a bit unusual to stand out these days.

Bismuth, thankfully are that little bit more interesting than the usual. Their concrete sound is borne from the former bassist from Diet Pills (that's I think three bands that have come from the original now, like feedback cell division) and a drummer she's picked up from somewhere.

The Eternal Marshes brings forth almost a funeral doom speed, we're talking glacial or coastal erosion movement here. The bass and drums follow each other, giving it that old school sense of hanging heaviness. Recorded by the Phil Spector of harcore himself, Boulty of Stuck on a Name in Nottingham, the overall tone is as miasmic and claw-inducing as you'd expect. The single track on this amazing-looking tape (it's red and has some blackened vines/trees all over the surface) lurches forward like some dying beast, before descending into quiet notes which are barely there, while Tanya croons like a wraith over the resulting calm. This leaves space for the track to build up again, which it does in predictable, but crushing style. One to witness live as it will probably rattle your jaw/belt buckle/steel toecaps in some lovely way.