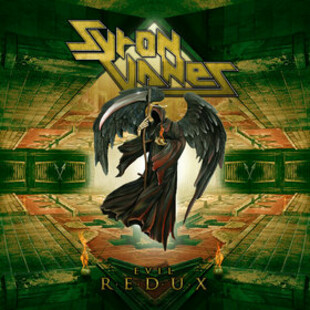 For a band that has been around since 1980, hands up those who have actually heard of Syron Vanes?

I can happily say that I was totally oblivious to them until this dropped into my inbox. Yet here it was, the 7th instalment from the band that simply refuse to give up and keep on rocking.

As with all reviews I've done, I settled down, turned it up loud and listened to the latest offering from the Swedish metallers.

For a band that has been around for over 30 years, I have to admit to being a little disappointed. If you cast your mind back to the mid 80’s, when hair metal and spandex ruled the airwaves, Bon Jovi, Aerosmith, Europe and Motley Crue dominated MTV and made followers of thrash metal feel sick just at the mere site of them, Syron Vanes are stuck in a bit of a time warp.

They have the makings of some very good songs though, and the musicianship cannot be disputed, with some excellent guitar riffs, that would grace any metal album, and the same of some of the drumming. Two great example of this are Devils Dancing and Hellion Child where the opening music on both tracks gives you hope of it being a heavy and powerful song, but when you put it all together and add the vocals, as with most of the songs, it just loses any forward momentum.

All of the songs on Evil Redux are of a similar vein with the singer Rimbert Wahlstroem, delivering a wide variety of vocals over the album. It’s almost like they have played safe and given an album that really is “metal by numbers” – opening riff, verse, chorus, verse, guitar solo, chorus.

Now, I'm sure that with most music, there will be people that enjoy the 80’s rock/metal scene, indeed I have friends that regularly go and watch the likes of Saxon and Magnum, so this will no doubt appeal to them, but to me this genre was something I avoided then and I still avoid it to this day.