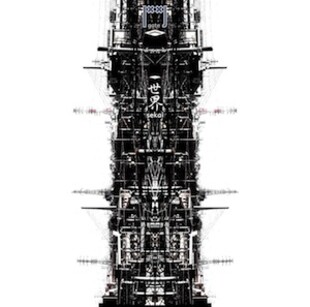 Gate is an experiment in improvised music by Lajos Ishibashi-Brons, a Dutch philosopher and musician living in Japan. This is, his 4th and pretty remarkably the 51st release in a five-year existence for Fluttery Records who deal with many genre’s from contemporary classical music to electronica, post rock and more with artists from all over the world.

The 5 pieces of cinematic, sound experiments on this release named Sekai (World) were constructed by building four layers of improvised experimentation into one mix, the idea being more of a collage of sound creating atmospherics with a slightly distorted view point, this is ugly beauty. What comes to mind for this listener is a constant sense of movement and slight discomfort within this movement, not that these are not enjoyable to listen to but this isn‘t completely about the sun and moon, this is the world from now.

The infinite sounds that engulf city folk, there‘s an ignorance to those sounds that we have by the smoky tanker load making them acceptable, this works as specific to the artists whereabouts that some folk find comfort in, it seems that this is a study of this idea. There is no reason to separate the five tracks as I feel they must be spoken about as a body, maybe our own bodies absorbing modern life’s audio. Each around the 15 minute mark and each remaining within a similar message.

I like the space it creates with the use of sound, it evokes the infinite (while being minimal) which makes this more of an enjoyable listen when alone, it’s totally personal, it’s introspective in the sense of viewpoint, like how Cage made you listen to what was around the actual music and not necessarily what was being played, even Stockhausen‘s sense of space, and even more so Steve Reich when talking about musical exploration and preparation of layered sound. This also mix’s both traditional instruments and sampled/and or digital sounds within and throughout, there’s distortion, eerie woodwind and monotonous churning noises, it‘s sinister mood keeps bringing me back to when I first saw Japanese cyber punk classic Tetsuo: The Iron Man with the sound up, (the first time being accompanied by Earth‘s Sunn Amps and Smashed Guitars album for some reason), but the more introspective moments in that movie where your seeing life through The Iron Man’s eyes. Good stuff. Ok so now I’m going to re-arrange everything in my house and leave this playing at full volume and let my housemates pick up the pieces when they get home from work, surrealist pranks are my favourite…