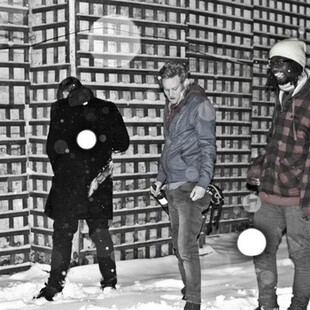 What a lovely name! Conjures up thoughts of fragrant pot pourri doesn't it?

Gary what used to be in that Diet Pills thing is now the singy man in a new group and he still sounds like a cat being stepped on. It's all to rather a more punk score though. The band's sound is scratchy, like a chicken trying to find grubs under your forearm and his screeches and yelps are over-ridden at points by an almost sass-like caterwaul. Remember sass? Blood Brothers et al mincing all over the place like macho hardcore wasn't no thing, all bullet belts, skinny jeans and plaid shirts. I'm guessing this is the guy from Beestung Lips wailing as they verged on a bit of sassy messing about at times too.

Just to round off the 'I'm so fucking clever' spiel, the music does have elements of Knives in there too, all swingy and unusual guitar-wrangling. If you've never heard them, try and check out their demo, it was (and still is) a piece of rough-shod genius.

Screw on here I'm guessing isn't the thing you fix things to all wall with, unless Gary is trying some kinky DIY. Actually for those unfamiliar with Diet Pills, shame on you. They were the midlands' answer to a question nobody asked, think Oxbow via a tonne of feedback and plaster-bothering shows that rocked foundations. Screw is mental actually and out-trumps that band's weirdness, the sound of grown men wailing all together must make sharing rehearsal space with them very scary indeed.

File this under 'what' and lock the cabinet (if you are still using an unwieldy paper-based system). This should be played to criminals at quiet volumes under their pillows late at night in order to scare them straight, or gay, or something. Just wrong.