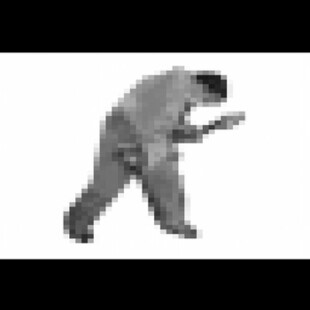 COWMAN's new album, the comically prurient title, Artificial Dissemination which has been somewhat ‘Artificially Disseminated’ by the COWMAN himself over here at ninehertz, starts off strong- weird 90's guitar that is like the soundtrack to a David Lynch film, most probably Lost Highway. The opening bit of the album is psychedelic rock and it eventually transitions into harsher power electronics. The overall sound and electro jumble reminds me of cult Chicago bizarro punkers Plastic Crimewave Sound or maybe someone like Fly Pan Am.

COWMAN presents us with a very dense maximal guitar sound with tonnes of reverb and the occasional gutteral human originated squal all with a nod toward artifice with some computer and pedal board trickery. The drum-machine is unrepentant and becomes like a kind of bedroom Big Black.

I Didn't really have the patience to get through all the cover versions that come as a supplement to the download but it puts COWMAN's thinking into some kind of context; Roky Erickson, Pixies, Shellac, Pavement to name a few. I think COWMAN does that solo weirdness thing of straddling a few genres without really buying into one aesthetic, which is where it’s interesting, in fact putting out really odd solo music is very cool and intriguing and of course allows for a lot of freedom, experimentation and malleability but as a result I'm not really sure if this is supposed to be a provocative power noise record or what? It’s left me feeling like the idea behind COWMAN itself is really maximal with tonnes of reverb and as a listener I’m kind of lost.

Overall, Artificial Dissemination is quite hard to write about (which is an achievement I suppose). The Steve Albini influence is worn on COWMAN’s sleeve, (sleeve Albini, you could say -haha). I genuinely and warmly prefer the 90s industrial psych end of COWMAN's style opposed to the more pure noise Whitehouse/ Throbbing Gristle thang. Artificial Dissemination has some very unique qualities, especially when it sounds like a menacing pixelated point and click adventure- I like it, but as a whole comes across as a bit too incoherent.