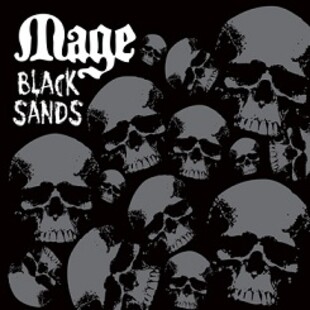 Doom perchance? A monochrome cover of skulls, the words cosmic, witch and, er, doom in the song titles, and a band from the Midlands - the genre of Mage is not a surprise when Black Sands reaches my ears. The sound is at the metal end of the genre, with a natural bias towards the traditional doom godfathers.

There are pointers to the influence of Saint vitus or The Obsessed throughout, not least due to flecks of Wino in the vocal delivery when at their best, and it feels strangely refreshing that they steer clear of the more modern doom trends, eschewing the brutality of sludge, the moods of drone or the drawn out lethargy of Electric Wizard and the like.

There are some criticisms - the metal base from which they build occasionally sounds a little stale and some of the lyrics are clunkily cliched. The vocals struggle at various points too - left with nowhere to hide by the clean production job they struggle and strain and damage the effectiveness of a few of the tracks.

There are equal high points. The general feel of Goatsnake that pervades throughout is warming. Cosmic Cruiser X is prefectly paced with a space-y edge. There's a groove there and on other tracks, such as Hulk Out that, once upon a time, may have been called stoner rock, when the term refered to a wider base of musical inspiration and before it was subject to revisionist vilification.

For me, Black Sands would be better at half the length, but that's based on my musical preferences and another set of ears may just as likely agree with the sentiment while choosing the other half of songs. Well worth checking out and keeping an eye out for in future.