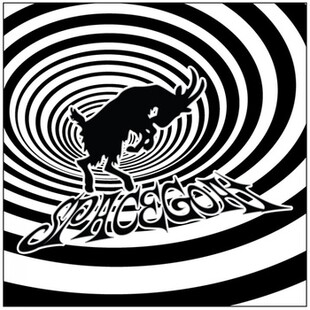 There are not many releases that usually get me hooked after one listen. Recent bands to do this have been Sunswitch, Uncle Acid and the Deadbeats and Admiral Sir Cloudesley Shovell. But this EP from the wonderfully titled Spacegoat has just got my head rocking, feet tapping and put me in a very good mood, well, considering its Tuesday afternoon and it’s snowing outside!

Spacegoat are a classic 70’s influenced rock band from Monterrey in Mexico, formed by siblings Miguel and Gina Rios, who have taken Sabbath-esque riffs and turned them into a little piece of stoner/doom heaven. It would be easy to characterise them as just another female fronted doom band, but Gina’s soulful voice leads the band perfectly, without even trying too hard. The music compliments her angelic bilingual vocal display exceptionally well, as it adds a great deal of depth to the bluesy riffs carefully laid down by her and Miguel. Alongside Sophie from brummie doomsters Alunah, they represent all that is good about female fronted doom bands, learning lessons from their peers such as Lori from Acid King.

This five-song EP, beginning with Silver Swamp, is a superb first effort by Spacegoat. Combining many elements of music that I really enjoy, laid back groovy bass lines, intricate, but not overly complex guitar riffs and not to heavy drums, they fuse together to make songs that are just really simple to enjoy. They haven’t gone overboard and tried too hard to impress, which some bands can be accused of, but they have laid some pretty solid foundations for a hopefully long career in this genre.

I know that it will be easy to accuse Spacegoat of trying to hold on to the coattails of the current revival of 70’s inspired, psychedelic doom laden rock, but they do bring another dimension to their music. The songs seem to be beautifully crafted and full of emotion. If the full length album is anywhere near as good as this EP, then the future is very bright indeed. The hidden gem on this EP is the awesome Cosmica”. I have a thing for bands singing in their native tongue, and this demonstrates that perfectly, as the Spanish just adds something extra to their repertoire.

It’s great when I get sent music by bands that I've never heard of before, because I go in with an open mind, but other bands now have a battle of their hands to top this, as it really is quite superb. One of my mates has a thing for bands that have goat in the title, but this is one band that he hasn't heard of before, and I'm quite pleased, in a kind of sad way that I've managed to hear it before him.