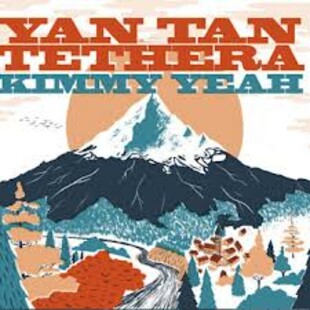 I've listened to this album several times now since I was asked to review it, and I still have no idea where to start writing about it. It’s one of those albums that mixes genres and styles and crosses so many different boundaries that I can hear loads of different influences in there, some obvious, some not so. And my opinion has swayed from one way to the other several times.

Kimmy Yeah are a 4 piece from Sheffield, formed out of the Steel City’s ashes, and they’ve created an eclectic blend of abrasive and noisy songs, cramming into one song what most bands attempt over an entire album. From the slow intro of Set aFlame, they then launch an audible assault on your eardrums, with a triple vocal battle spread across some raucous guitars and thundering drums.

The drums drive the songs onwards and propel them to dizzy heights, FourFive being a great example. It’s great to hear a song being drum led. The fuzzy guitars then mix with the drums to produce a really effective song that sets the tone for the rest of the album.

Maybe my eardrums deceive me slightly, but I can hear tinges of Fugazi and NoMeansNo in their songs, and being a lover of those two particular bands, these songs do make for some pleasurable listening. I’m pleased that they didn’t go for the safe move of trying to sound like Sheffield’s favourite bunch of arctic monkeys, as too many bands have done in the past.

Loincloth is a deceptively brilliant song, as it kind of ambles along rather nicely with some great harmonised vocals, before the guitars are turned up to 10 to speed the song along to mix well with the change of vocal direction.

My only major concern with this album is that a few of the songs sound that they are sticking to the same formula over and over again. This doesn't deter from the fact that the songs are well written and performed to a good standard, but it might put some listeners off as they might get bored by track 6. Which if they do, then they are missing the best two songs next in Biketheft and Ask The Universe.

It’s a really enjoyable album and I'm sure that their live shows are full of energy and I look forward to seeing them at a venue near me in the future.