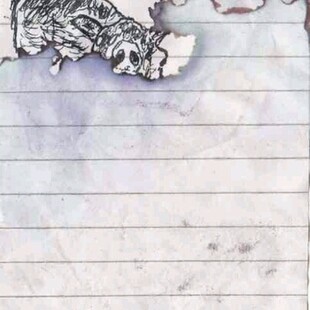 This is another release from the excellent Armed Within Movement. This time it's two strikingly different artists sharing a C20.

Adam Beckley's side is the track New Western which is a tundra-white slab of high ringing tones and swirling, light-as-a-feather feedback loops. There's a sense of volume being suppressed here and it's pleasing, smooth nature glides effortlessly out of the speaker. Apparently this track is a reworking of one of Adam's first ever recordings entitled simply as Western. This new version cuts up the original, guitar-based work and eliminates the harsh or gritty noises produced there, giving it this aimless, floating sound. There is a lot going on under the wind-like sheen, guitars collide against each other in delayed wrapping and its a bleary-eyed glance into fog as a result.

Amnertia on the other hand is experimental label Transient Constellations' head Max Leonard Hitchings' attempt at seemingly grasping the sound of madness by both horns. You'll recognise the piano track he has bent into mad new shapes, but you probably won't enjoy it. Like your ears have been twisted into crooked fronds, the notes are off-kilter and tuneless and have underlying echoes of dread in there too. Like being trapped off a slow-moving, yet impossible to get off merry-go-round, this is the sound of a dream gone wrong. Treacle-thick and a bit frightening, it's certainly an example of where experimental frippery can get you if you spend that sliver of time too much on sound manipulation. This side would be good to play at full blast to put off trick or treaters at Halloween. Anybody playing this is an isolationist, a dung-breathed man you want to cross the street to avoid.

Listen to this contrasting split here for proof, I dare you.