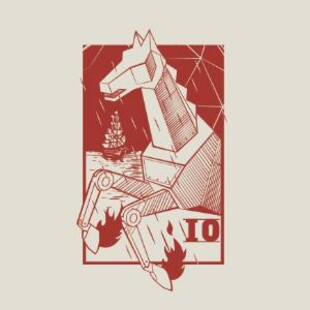 In an age where every music magazine rushes to create another sub genre- post this, post that, shoegaze (who came up with that ridiculous title) I am not going to join in and label Io anything other than a fantastic young British heavy music group.

One of the great things about reviewing things for 9hz is being given the chance to discover bands that otherwise you wouldn’t have come across. This is the third album from the four piece from Birmingham. Anyone who likes Isis, Fugazi or in fact anyone who claims to like intelligent, heavy music of any shape or form should get their sweaty hands on a copy of this.

Over the course of 6 songs- the majority of which are 5 minutes plus- you are exposed to everything from discordant, feedback drenched, slow Neurosis like passages through to reflective instrumental passages and let’s not forget the great shouty vocals of Al Lawson. Shouty is a well known technical term for vocalists for those not in the now.

The standard of musicianship is something to behold, particularly in the way the instruments mesh, fade in and out over one other and constantly take interesting left turns. The most impressive thing is the extraordinary range of ideas on each track. For an album where most tracks are fairly long, drawn out affairs my interest never waned for a minute.

Picking individual tracks to highlight is difficult as I never seem to do anything other than listen to the album from start to finish. If pushed I would pick the opener The Lost Command. The drums have a tribal feel and this combined with the down tuned guitars seems to be leading to something ominous. It then morphs briefly into a guitar pattern that sounds briefly like the Chilli Peppers when they were good before Al stars lacerating his larynx over the top. The pace then slows into an extended hypnotic instrumental passage with almost choral vocals. I’ve tried my best but I can’t really hope to explain all of the ideas on this one track, let alone the whole album.