Volume VI of the War Pygmalion series of looks back at classic albums from a previously ignorant eye continues with a gothic trip back to 1994. 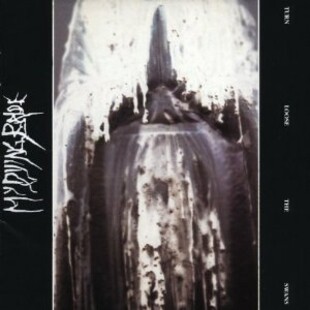 While the album title sounds like a humerous alternate take on "unleash the hounds" as spoken by an effeminate man in a red crushed velvet longcoat and embroidered tippet, accompanied by a waft of his hankerchief, never forget this. Swans are vicious. This April a man died after a swan tipped him out of his kayak and attacked him every time he tried to swim to shore. Burly Irish rowers will gladly cancel an outing on the river because there's a swan vaguely nearby. So while they're not strong enough to break human bones, they are hugely aggressive and territorial. You can't even chin one because they belong to the Queen and it's a criminal offence (unlike using string to tie ducks into a tubular shape and firing them from a mortar, which is both legal and oddly satisfying). In short, fuck swans.

Anyway, Turn Loose the Swans is the second album from Bradford's second most miserable ensemble (just behind the Bronte sisters) and was originally released in 1994. And by God it shows, at least in terms of the opening synthesiser sounds. Electronic instrument sounds from every decade have retained some credibility, the exception of which being the approximations of actual instruments that keyboard synths from the 90's tried to do, (a process called sample synthesis if you're interested), and hampered by the limitations of the budding technology, failed horrifically at. The hardware advanced fairly rapidly and left records from this era sounding horribly dated and those sounds are all over this record. So your first hurdle is getting past that.

Get past that and what you'll find is a mixture of atmospheric, classically inspired music and more typical doom metal. It's the former that's the more interesting here. The doom aspects, while perfectly fine, tend to go on for far too long with riffs repeated ad infinitum with little in the way of variation. 2 of the tracks clock in at over ten minutes and frankly, neither really need to.

So it's the lacy cuffed, kohl eyed side of the band that turns out to be the most interesting. These generally feature piano (or some synth programmers idea of what a piano probably sounds like) and frontman Aaron Stainthorpe crooning away about religion and other such matters. The first and last tracks use no electric guitar at all and are instead bolstered by some excellent violin playing care of new guy Martin Powell. In short, it's what I thought Type O Negative sounded like after seeing their pictures in magazines but never actually heard their music.

So is it a classic? No. As already mentioned, the doomier parts of it drag on and it feels like a chore for long stretches. The more contemplative and gothier parts make it half an interesting album but as it's not a genre I'm particularly interested in, I reckon this is all I need to listen to. Plus I can't take all the black clad romaticism seriously knowing they're from Bradford and probably all secretly think of the bands real name as 'Me Lass Badly' before the label made them change it.