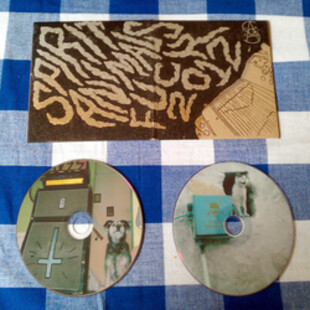 It was 2004, noise music was de rigeur and every fucker seemed to be hooking contact mics up to their fridge and yawning into delay pedals behind halloween masks.

Few people did it well- but when they did, boy! did they open up spaces you never new music could go.

I was so bold, even as to make my own droney blipcore on my computer late into the night- most of which is now (perhaps not so sadly) lost on mangled hard-drives, good job probably as one reviewer said it sounded like, 'someone tuning up in a duffle bag' and 'a gameboy being cooked in a microwave'.

Sprit Animals, (which I'm guessing is one beardy scouser) is definately on side of doing noise/drone/ power electronics particularly well. It's just purely a personal taste thing, but I really enthusiastically like everything about this record, from the warm sine-wavey sounds of the opening track "OM is where the heart is"- which builds into cacophonous screams to the excitement and unpredictability over the rest of it...back to the warmth of the fab D.I.Y OR G.T.F.O.This is exactly the kind of experimental electronics my sad sore ears crave to feel alive again.

That West African thumb piano thing- friend to noise artistes, makes an appearance, accordion haunts the dear listener until it is incomprehensibly warped, nice to hear a few throat screams thrown in for good measure too and in some parts it's more about the negative space- whats left out than left in. How ace is that?

Music like this crosses the murky, confusing, fuzz filled divide in this genre of shit to brilliant when it is emotionally resonant and has meaning, remains surprising and in short, sounds good, which Fuck 2012 most certainly does. The visual stuff surrounding Spirit Animals is also really cool, album art and DVDs and all that.

So thanks Spirit Animals, Fuck 2012 has inspired me, to soundtrack films, sit cross legged in a gallery whilst my ears are pummeled, I might even fire up some pirated native instruments software and pick up where I left off. Top notch.