Weapons To Hunt Blessed In Sin 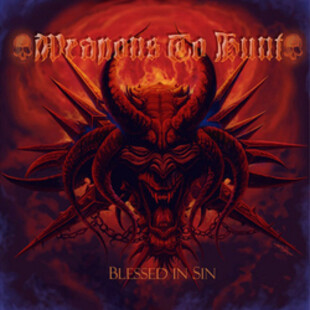 Isn't metal silly? Black t-shirts, fast drums and it's all so LOUD isn't it?

Why can't we hear the words? What are they playing? It's too distorted for me. This band are called Weapons To Hunt, well that's just daft isn't it? Tell you what was a good name, The Beatles, because at first you think; "Oh yeah, that's the type of insect..." then you look again and shit, no it isn't they've cleverly used the word 'beat' because they play music and that has beats in.

If you like music that sounds like angry wasps and sewing machines going wrong, then put this album on. The cover is red (which reminds me of the Phil Collins album No Jacket Required like tomato soup) and has an evil-looking demon or devil on it too.

One of the members, the young man who plays guitar is called Bas Brussaard, he manages to at least be heard over this din, his pealing notes are quite pleasant when they chime over the man being sick for the whole CD (his name is Adrie Kloosterwaard and he has a bee in his bonnet, are bees insects? I think they might be).

Most of this band also seem to have been in a band called SINISTER too, which is about as scary as Scooby Doo as a name. Weapons To Hunt doesn't seem so bad now. The worst name is Mr Brussaard's old band though, they were called Fondlecorpse, I'm not even making that up.

If you like shoot-em ups and want to move on from stuff like Drowning Pool, this is the next step up.

All together now children; "I HATE MY PARENTS!"

Forums - Reviews and Articles - Weapons To Hunt - Blessed In Sin