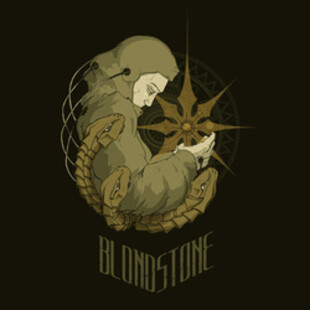 It would appear that the influence of Queens of the Stone Age, Nirvana et al knows no bounds.

They have effectively spawned Blondstone, a three-piece who play desert/grunge rock and hail from the unlikely location of Nancy in NE France. The best bands in this genre are able to combine, often in the same song, an almighty garage-y racket with an ear for a catchy chorus. At their best QOTSA and Nirvana manage to do this with seeming ease.

This 5 track EP (which is free to download on Bandcamp) is a decent first effort. Some of the tracks sound like songs that would have been considered but not actually made the cut on Era Vulgaris.

I don't mean this to sound disparaging because the boys are good musicians and clearly take what they do seriously. It's just that like many things in life you have to keep plugging away until you finally crack it.

They are not at that stage but there is enough on here to suggest that they should certainly keep on trying. The single Shoot Shoot is a good example. It grooves and makes you tap your feet a bit but never really takes off. It suffers as does the EP as a whole, from a lack of memorable choruses.

This is not to suggest that the record is without its merits. Shoulder To Cry On is probably the most successful track on here. Reminiscent of a better Hole or Von Bondies song (don’t let that put you off) it has a rumbling bass, punkish guitars and a relatively sing a long chorus.

There is always a danger when a band starts out that they are slavishly, if subconsciously, a product of their influences. Blondstone are better than that but they need on subsequent releases to make sure that they develop their sound because the world certainly doesn’t need ‘Le Queens of the Stone Age’.