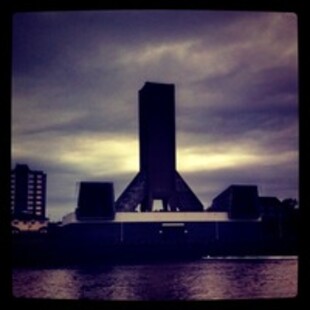 London’s Deathline are billed as this really serious post-punk band with lots of high-browed influences like Einsturzende Neubauten and Ennio Morricone. After listening to their new album NOVA it feels a hell of a lot more fun and pop than that- and comes across more like a codeine’d-out Rachel Stamp or King Adora.

The whole thing sounds like a circa 1991 Peel Session, fondly remembered solely by the staff of second hand record shops. There is nothing new (or ‘neu’ even) about NOVA, its all retro regardless of how many triangles are substituted for letters in the name.

This record is largely, not unpleasant noir garage rock. The visual shit that surrounds this band is the hyper stylised Artrocker magazine does goth which seems to have a resurgence every four years or so in and around trendy North London nightlife.

I find the most fun parts of NOVA are the camper, high octane, glam pop elements of this record also expressed in the Michael Alig Party Monster club kid remixes on their Ten of Clubs EP (title track of which appears on the album).

It then seems a shame that the smudged guyliner, hit the town dressed in a bin bag element of this band are obscured in a whirlpool of overproduction and flabby shoegaze. NOVA is incoherent and there is a lot of window dressing around this duo, for something that could have been so simple. Saying that, I reckon they would be great to see live.