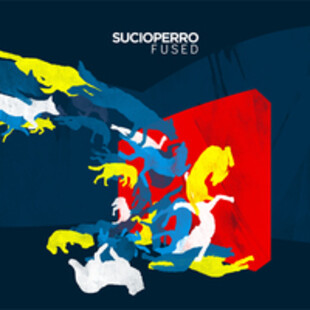 A blast of pop-driven Scottish indie? G'wan then.

Sucioperro have had an interesting past, in existence since 2002, they've toured with bands like Hell Is For Heroes, Biify Clyro and Oceansize and released a string of albums and EPs.

What Fused represents is them breaking away from their former label and delivering a more rough-shod version of their sound. Self-produced and released, it's a fantastic effort. However, their links of Biffy (one of them is in Marmalade Duke with a BC member) mean there's a definite influence there. That smooth, pop sound that Biffy have honed in recent years has rubbed off on Sucioperro's sound. It's a great sound though and they do have their own identity. It's a strange mix of distorted guitars with clean vocals peppered by backing vocals on the screechy side.

Hammering all over it is a drummer who is keen on lively, jaunty beats like on Wolves but the sleazy and dirty What A Fucking Champ mixes things up a bit. Much heavier and a bit more gutter-diving than the opening tracks it's perhaps where the band should head next. There's some insane keyboard twiddling away under this too, which adds another layer to the clean production, messing it up nicely with a wall of sound style.

They change things up again on Rabbits In Boxes which is sparse and full of acoustic guitar and quite witty lyrics. It bursts into life later but feels like an odd fit on an album which shows invention in spades elsewhere.

Take the slow-burning Pig Ravens on which the bass pulses like a The Fragile-era Nine Inch Nails with some fantastic harmonies on top, before ending with some static suddenly.

This is one to put on if you're in the mood for something halfway between heavy and chart-bothering indie gone pop. Quite where they are aiming is anyone's guess, but they are on tour soon so check them out (and let us know how they are).

Listen to it here.