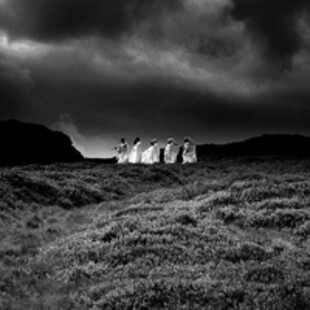 Trudger are frum tarn, now if you've lived in Barnsley (I've had the (dis)pleasure) you'll understand that.

If not, then Sheffield's weird brother is referred to by natives as tarn, or tahn, town for your southerners. The town has a coal mining history and its own accent and dialect despite only being down the road from both Sheffield and Leeds and Trudger make music about as unique.

As black as the coal the town used to cough up from its now derelict pits (I'm really labouring the point here) Trudger seem to be channeling the rougher end of Old Man Gloom, with some deep, deathy vocals and some really choppy riffs that could also drum up echoes of early Cave In.

This three-track effort (maybe a demo?) sounds fantastic regardless, the ghosts of Will Haven's past have an influence on here before, that relentless groove heads straight through the likes of Misery Labyrinth to devastating effect. It's epic without being pretentious and it's heavy without being meatheaded, the perfect mix.

They know how to step off the gas too, the intro to closer Crusade on the Tides of Hades (a mealy mouthful) is restrained and suggests a talent for building tension when it'[s needed before crashing into the guttural lyrics, which include the lines; 'the water darkens around the ship/ satan spits thunder through the night/ stockpiled hate, across thousands of centuries' which sounds like a typical night out at the town's Walkabout.

I'll be seeing if we can get these for a show soon, I'm guessing they level venues with this sound, phenomenal. Take a listen here.