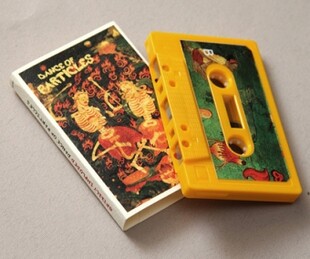 Italians are bonkers yeah? This is a yellow tape, recorded in a basement by three mentals seemingly influenced by the bad end of the Bhagavad Gita, interested?

You should be, in no way representative of their native Napoli, these three loons have created a stream of consciousness so dense, you'll need a scythe to get out of their confusing and dizzying racket jungle. Just two tracks of Beefheart-purloined freakout fluff are ingrained in the churning plastic and that's probably all you'll need.

It's a messy, vomit-flecked bit of experimentation complete with whistling feedback and only brief moments of all three contributors matching up. What you get as a result is a rambling knot of noise, but under there are Indian scales, sub-AmRep feedback worship and riffs along with a drummer doing his best to seemingly kill a swarm of wasps that are crawling all over his kit.

I once had a Fisher Price tape recorder, it came with a yellow tape that looked like this one, if said tape had been buried in a bog, been strapped to a belt linisher for a bit and then put back in that recorder, it would have probably sounded like this.

In case you are wondering, this is worth hearing, so many layers within its brief time span it's unreal. There's only a limited amount available, so investigate here now.

Oh and as a footnote, they have released their first tape on a label called Scrotum Records, what more reason do you need?