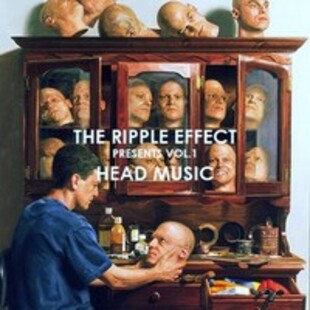 You know you're not onto a winning v/a compilation when your predominant thought is "yay, 1.5 songs down; just 21.5 songs to go..."

If you like bands that mostly sound like they've listened to a fair amount of Pantera and Black Sabbath (amongst others), then you'll really dig this compilation. If you really dig heavy stoner in general, then you probably can't go too wrong with this for a fun listen. Lots of fuzziness, solos, stoner riffs, and gruff pseudo-bluesy vocals. A lot of the bands blend into the background in an onslaught of fuzz and percussion, but none of them are bad; merely a tad monotonous across the massive length of the compilation.

It's like a slightly-varied average support act for a band you really like - entirely inoffensive, and you can tap your foot to some of it, but you'd still rather it was over fairly quick. Stubb however were the one band that I felt stood out a little amongst their peers.

It's been released by the two music lovers that run the Ripple Effect website/label, and they do clearly have a massive level of enthusiasm for this kind of sound, and it's both endearing and admirable that they put so much effort into seeking obscure bands in this vein, and then promoting them. For some reason the Bandcamp page claims that one of the two involved in the website is a member of Racer X (the speed metal band that Paul Gilbert famously masturbates a fretboard for). It's only this page that seems to suggest that, so I'm pretty sure that's wrong, so don't let the supposed fact put you off if you're not a fan of Racer X (likely), or draw you in if you're a massive fan of Racer X (really?!). Tip for future releases, guys: try and normalise the volume of each track so I don't have to tweak the volume knob many times across a whole album.

The overall effect is that I know it's something I would have really enjoyed about a decade ago, and I know a handful of people who can't get enough of this kinda sound that I may pass the link on to; but ultimately it's a compilation album that is consistently fairly pleasant to my ears, but fails to ever excite me. One of the major things this album evokes in me is a sense of nostalgia for my young teenage listening tastes - despite this all being new music, it thoroughly re-treads familiar tropes in an inoffensive and comforting way.

I'm sorry, to both the Ripple Effect, the 23 bands, and anyone reading this. Overall, it was fun enough, but very little stood out as a refreshingly good and/or new. Very solid for genre enthusiasts, but I'm not entirely convinced that even big stoner-rock fans are going to find it entirely fascinating. Listen to it here, and give some attention to some quite-fun obscure bands.