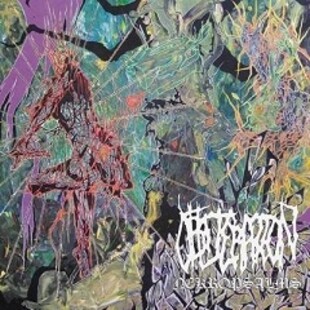 Kolboltn, Norway is the home of a band named Obliteration; Obliteration released an album back in 2009 called Nekropsalms. This album is Norwegian death metal through and through.

The track is listed with an interesting quip from the band, ‘Morbid thoughts of human meat, find some whore and eat her raw’ I think that’s what I’ll opt for in a birthday card to my mother next year.

The next offering is a track entitled Catacombs of Horror which shows off the band doing much of the same generic death metal that we’re all used to and often bored to tears with. This one has a slightly less graphic quote, it simply reads, ‘Resurrected, they rise from their tombs, graves of the forgotten dead’

Exterminate follows next, just like the previous tracks, this offers much the same apart from a slightly odd time-signature and one killer riff which is promptly stopped as soon as I started to enjoy it and turned back into the a different death metal march.

This quote line is slightly different and reads ‘Death-Horror-Pain, A new life born again’ I believe this is what all new parents think when they a gifted with a new life.

Following next is a track titled, The Spawn of the Dying Kind, this track begins slowly and decides to build into a touch of thrash, no bad thing as the growling has ceased in this one and the drummer is going for broke, nice changes too, like a wooden raft in a sea of watery shit. The tag line for this one reads ‘Witness the truth, a beam of raging fire, bursting out through the freezing soil’ I’m not 100% sure that this would stand up in court...

Fusing the album’s title into the next track is Nekropsalms Choke the Frozen Age. This is an attempt at Doom. Failing miserably, the band, opt to speed up but in the process, lose time with themselves, the middle of the song possesses a somewhat listenable riff which lasts for 30 seconds. The tag-line for this one reads, ‘No peace, anti-life, doomscapes forever, the deadly coven now rules these shores’ I think I saw that written somewhere else once, probably on a pencil case of a bullied child.

Styxerian Path (into darkness) blasts in next and is Obliteration doing their thrash-doom yet again with the same generic shite that I’ve endured in the last tracks, this one is quite special as they have a guest joining them on their road to death-metal superstardom, the guitarist in question? Chris Piss. That’s right, Christopher Piss. He came, switched on his wah-wah pedal and went for broke, clocking up an impressive 40 second, super-speed guitar solo. “Embracing the depths of Hades”

This track drags out the same old same old. Norwegian Death Metal with a hint of Thrash. Like a chalk and cheese butty. The two don’t mix, there are a few riffs placed strategically throughout this album but they are too short. As the album draws to a close, I can only say one thing for it...

I wouldn’t waste my money or your money for that matter.