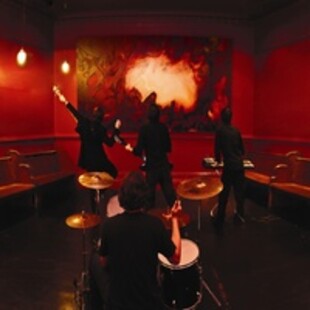 "Dammit Hughes, I need that copy on my desk by yesterday! We print at five!" Mike yells down the two-piece bakelite phone in his grand office at 9Hz towers before slamming down the receiver (This isn't actually that far from my real job- Ed.), the crash reverberating down the vast marble hallway before finally dying out somewhere between the puffin aviary and the ornamental fountain filled with puffins. (Mike likes puffins).

I sit at my desk in front of my Remington portable and a ream of cheap paper, meerschaum pipe hanging from my mouth bellowing a fine navy/cherry aromatic blend, silently thanking my Pulitzer that I'm a respected journalist at the top of his game in the 20's and not some twat in front of a computer in 2012 being harangued over Facebook on a wet Tuesday evening for not doing any reviews in a few weeks. That would be a proper shitter.

Anyway, I should probably stop bitching, as while it will undoubtedly raise a few eyebrows among 9hz regulars, Fire is certainly a nicely varied and leftfield release which I'm always wishing I got sent more of. 1 new track, a cover, an oddly chilled out and woodwind augmented reworking of an old track and 3 remixes make for an EP that never sits still for very long. The EP starts off with a sub two-minute blast of energy with the title track, an odd mixture of Young Machetes era Blood Brothers style chaos and mid-00's British indie which sounds bizarre but makes perfect sense on listening.

The next two tracks are mostly acoustic numbers, the Crosby Stills Nash and Young cover Ohio sounding like background music for a western. Sadly, it commits an offence that for some reason disproportionately irks me; lyrics about America sung by British bands. While the Kent State massacre was a powerful and worthy subject for a song back in the 70's, it seems like the time 4 boys from Salford spent replicating it could have been better used writing a protest song more fitting to this country and time. Still, good tune.

The remixes are nicely done if largely somewhat unmemorable moody ambient, and are the same length as the three 'proper' tracks plus half again which makes the EP feel very back heavy in terms of pacing. After the statement of intent of the opener, it's a jarring shift and not representative of the very eccentric-British prog sound of the bands self titled full length.

I'd start there if you were after some hard edged modern prog and progress to Fire after that. While this is an eclectic collection of tracks and good showcase for the bands diversity, the lack of cohesion makes for a slightly inconsistent listen and I can't help that first time listeners would be better served by easing themselves into the bands catalogue chronologically.