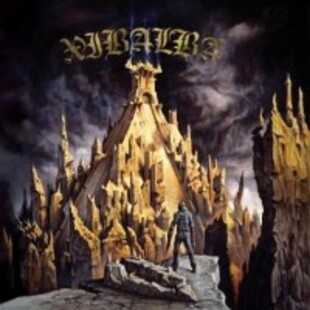 The album artwork looks somewhat like it belongs to a low-grade fantasy novel or a pixellated apocalyptic computer game (though the artist's previous employers include Entombed, Morbid Angel, and Suffocation). The title translates as “To The Death", and the band name translates as 'Place of Fear', signifying the Mayan underworld; and whilst internet searches bring up myriad bands with the same moniker (most notably the established Mexican black metal band); this is the American band hailing from California.

It's out on Southern Lord. For English readers - they toured nationally last month: we probably all missed them, whoops. You can source their video for the song Cold from the album on YouTube; featuring a rather entertaining video of a living room gig in one of their apartments with a bunch of friends.

Musically, they're slightly akin to a non-industrial Godflesh - very much focused on the hardcore end of metal, with a brutal low-end aural assault and a sludgy d-beat edge. Sunn0)))'s Greg Anderson contributes some guitar to the album which most likely explains the extended fuzzy drones that crop up across the recording to give a nice bit of warmth from the relentless attack of cold hardcore, and is most certainly a welcome addition that adds to the uniqueness of the sound; it’s almost like they’re embracing Mr. J.K.Broadrick’s entire repertoire and compiling it into one big sound - and it’s by no means a bad thing.

Definitely one to watch; I suspect this isn't the best album they'll do; and whilst their heavy chugging riffs are like wading through concrete, it'd be nice to see them craft the songs in a slightly more memorable way to make them stand out individually (for example, track 6 - The Flood - is an instrumental track that sees the band spinning some very fine atmospheres and moving outside of their usual format); though I do hope they’ll either manage to secure Greg A for future recordings, or draft in their own personal drone-weaver. Whilst the whole album is definitely good, when it last for almost an hour it makes you somewhat wish they’d cut out at least a couple of songs so it didn’t outstay its welcome. That’s not to say it’s in any way monotonous; it just gets pretty intense and unyielding even to these seasoned ears. Lovely stuff though.