Enabler All Hail the Void 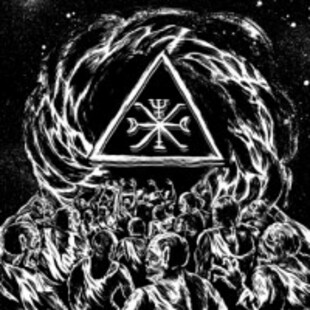 The unassumingly textless Jimpaler-penned artwork depicting an image I'd usually presume to belong to a Cannibal Corpse-esque band actually belongs to the debut on Southern Lord records for Enabler, who've already released 2 albums, 1 EP, and a couple of splits since 2010.

For 30 seconds or so, there's a gentle acoustic introduction, before the album erupts into a relentless barrage of thrashy hardcore crust and metalcore, with hints of blackened death metal for a further 35 minutes.

One of the most immediate things I noticed was the crispness of the production / recording, which is usually a bit of a rarity in all things crust. Bizarrely, some instrumental sections manage to recall scraps of NWOBHM in their melodic riffing and heaviness when they dance around on the fretboard (but fortunately not in the wince-inducing way that Wolfbrigade did across their last album which was stuffed with irritating soloing), whilst at other times they’ll delve into Converge-like sludgy grinding. Often hardcore/sludge albums have a tendency toward monotony across their entire length, but Enabler avoid that pitfall by adding enough instrumental nuances to maintain interest - whilst there’s very much a defined sound across the whole album - it’s always the same, always a bit different.

The overall effect is pretty relentless, but I will concede that I enjoy them most at the moments things tend to go a bit sludgy, and when they avoid chugging riffs which occasionally give flashbacks to bad melodic metalcore from a decade ago. It’s all a very cathartic aggression, but not really up to the high standards of some of the dominating names in the rest of Southern Lord’s roster. Whilst it never bores, it never truly excites either - a very solid and fun album, but not one to obsess over, unfortunately; and the ultimate effect it had on me was a craving to go listen to Iskra’s 2004 s/t album which has similar musical ingredients to this (albeit with more of a black metal bent).

As a side-note? Remember Fall Out Boy? Remember them being a bit... rubbish? Their drummer is the man hitting things on this recording, unexpectedly. And he’s rather solid too.

Forums - Reviews and Articles - Enabler - All Hail the Void