Master and the Mule The View From Nowhere 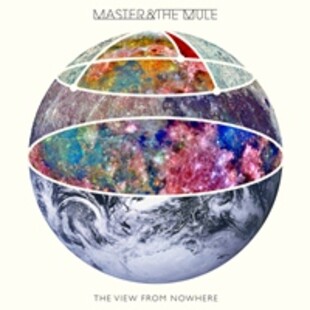 Look at that album cover! Cosmos in the sphere of the Earth! And, alas, beige. The cosmos stuff is interesting, but one gets the feeling we're going to be hearing the equivalent of beige, the colour of suburban living and IKEA furniture.

“In a time where the disposable and the faddish silt of the machine rule over honesty and true substance be prepared to be introduced to an ambitious and truly stunning body of work.”

So claims the blurb. The drums start, and part of me jokingly thinks, “Haha, Tool! Lateralus!?” And then I really start laughing because yeah, the vocal delivery, the guitars, the dynamics, are Tool-by-numbers on the opening track. It's not that ambitious to sound like Tool, because, you know, you sound like another band.

Also, tiny bit of choking vomit came up at the whole notion of the machine rule line. Yeah life's kind of bad sometimes, and yeah sometimes that dang government sure is mean, and all those big corporations. But, eugh, this reads like a teenager's MySpace blog. Remember that? Oh wait, or maybe Livejournal.

Right, well second track and at least they haven't tried to follow Tool's opus by blending from track to track. Stop-start rhythms, mathic structures, yep yep. So far so predictable. They may not be faddish, but I'm feeling like this band should call themselves And The Mule, drop the Master bit, because somehow it all feels a bit grey and boring.

By the third track it feels like I'm listening to the soundtrack for Quake, stuck somewhere in the 90s and riddled with that overly-intellectualised angst of the nerdy teenager.

Six tracks still to go, and I'm seriously pondering building a time machine to go back and slap the minor-goth trappings out of my teenage self. At least maybe then I could come to this fresh, because right now I'm cringing at the predictability on display. Or maybe all the angst is just out of me these days and I'm turning into an old sad bastard that only listens to old sad bastard music. Or Slagsmålsklubben, because their Swedish naff-hipster-dance anthem Sponsored By Destiny is more fun than this wobbly gothy noise and singing-through-gritted-teeth about wars and space and whatever bête noire bothers the vocalist on each track.

Oh and Mule really did just do the track-transition trick, track four to five, from their predictable murky tension on four to some soaring obviousness on five. I'm sure they're pretty competent, though maybe the guitars are hiding behind distortion. The drumming is complex, tight. But it's all so expected! The build-ups, the breakdowns. I suppose I'm being harsh on a debut album, I suppose for a first go it's very good, technically consummate. Just, like so much I encounter, it does nothing to truly surprise or push any boundaries.

Hell, I don't know, my standards are high and I can't even play Wonderwall on a guitar. Not that I'd want to, but you get what I'm reaching for. Not all musicians are meant to be transcendent geniuses I suppose, but when the blurb on Mule's page throws out words like “substantial” and “truly stunning” they had damn well better be ready to take the flak from people who will hold them accountable for their claims.

I'm off to listen to Marvin Gaye or something, you can listen to The View From Nowhere here and tell me how much of a Tool I am.