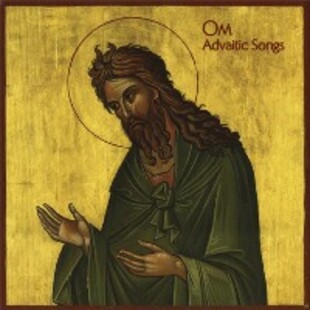 OM are an interesting beast these days. From the swirling vortex of riff and Al Cisneros's chant-like vocals, they have expanded on this sound over recent years with an even more eastern-influenced sound. It's as if the duo have rocked up in Israel in a tank, stood on the top and competed with the calls to prayer ringing out across the rooftops.

Advaitic Songs begins with no drums or bass in evidence at all, a lone, wandering female voice sings over eastern-tinged pipes, horns and strings for the scene-setting Addis before the familiar crushing ritual-like stomp comes in on State of Non-Return but even then there are eastern influences orbiting it's pomp and sun-baked majesty. It only continues onto tracks like Gethsemane where delicately plucked notes ring out below a breathing, organic pipe drone and what sounds like a darker Laurence of Arabia soundtrack. You can imagine Cisneros and Emil Amos wrapped in white muslin, on horseback, riding towards the sunset at points, scimitars gleaming in the fading sunlight, it really doesn't feel like a 2-piece stoner/doom band, more like the theme to an alien landscape, barren and with only the curl of campfire smoke for company.

To only add to this sand-filled feeling, Sinai actually features a call to prayer (from the sounds of it) before the steady, but pounding rhythm we all know from previous OM albums takes hold. The use of different instrumentation on this album in particular adds a much more rounded sound to OM's arsenal, if they can perform with a full complement of eastern musicians and not simply as a duo, the live spectacle would not doubt take on a ridiculously higher plane of existence. Flourishes of strings, archaic percussion and a sense of wonderment means this is a surreal, yet callming experience. If you're after the plod and bluntness that came with their more Sleep-esque albums, look elsewhere (or listen to Sleep) because OM have attained enlightenment.