Crash Doubt is a two-day punk and hardcore festival in Lincoln of all places, here's a snapshot...

There were over 80 bands on three stages, so a lot of this festival has moved into a blur. I will therefore be adopting a one-line review for all the bands I caught, some much better than others. This is also in no order at all, apologies.

ISOLATED are one of the first bands I saw that impressed, raging stuff with a stick-thin singer, they have a style that is all their own. Lyrics seem to be desperate and self-loathing, but not in a pitying way. 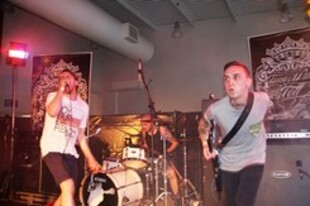 ATTACK! VIPERS! are perhaps the band of the weekend. They play a punk-inspired take on intelligent, well thought-out hardcore. Their vocalist steps into the crowd early on in the day and makes the weekend come alive. Seriously good stuff.

HEART IN HAND along with AZRIEL are hard bloody work, neither band seems to have an identity, just farting on in the same key and barked vocals that drag on and on. Where are these bands' souls? Azriel in particular is a completely different band to the one I saw a few years ago too, apparently the guitarist is the only original member. Very odd. Heart in Hand are headlining but show no real reason why, sorry.

HANG THE BASTARD have recently lost their vocalist (down the back of the sofa?) and they have a new balaclava's up replacement who handles himself well. Despite the puerile name, they do what they do well, heads down, chugging hardcore stuff which has the meatheads throwing shapes. Most interesting thing about their set? A girl slowly passing out on the side of the stage, winking at everyone who makes eye contact. 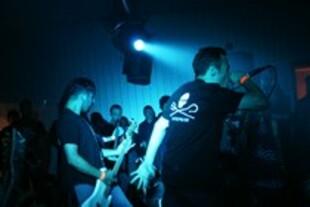 BASTIONS are a revelation compared to the homogenous mosh on display elsewhere. Dynamics help this particular band stand out with some clever lyrics and a world-weary rather than simply bluntly pissed off attitude. The singer seems frustrated with the world and is creatively shrugging his shoulders, I prefer this despondency compared to the idle violence preached by most bands this weekend.

THE ELIJAH is a complete surprise, bathed in flickering white light in the dark, their epic and keyboard-led post-rock via screamo is impressive. They stand resplendent before back-lit projections, all arms in the air and triumphant and its a mind-blowing set. The contrast between the singer's screams and the guitarist's clean vocals means they are elevated as one of the best acts of the festival.

GRADER are an Aberdeen band with attitude and their brand of vitriol washes well with the crowd. Grimacing and pulling some killer poses, their desperate and anguished sound is one I want to investigate now I'm back in the cold light of day.

THE LONG HAUL have a guitar sound that dulls their impact, too trebly to make out notes, their singer dominates and its a shame as when the leads do make it through the wasp's nest of tone, they are intricate and interesting. Perhaps the early start they had affected their sound as it improved through the day, shame. 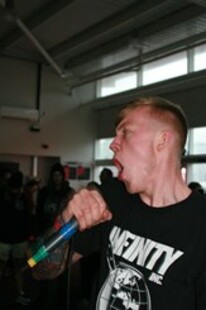 CRAZY ARM are by far one of the most uplifting bands of the weekend, part folk, part posi punk band, their fiddle-led sound means a massive crowd are all dancing and singing along. The crowd get ever rowdy, much to the amusement of the security, who give knowing smiles to each other over the flailing limbs. That's one thing that struck me over the weekend, the often older security were incredible over the weekend, calmly telling overenthusiastic members of the crowd to calm the random horse kicks and punching if it got too much and giggling to their colleagues when they had a chance. I often wonder what goes through security guys' heads at these things, we think the music is normal and interesting, to a lot of them it must seem like a vacuum cleaner with drums, well done sirs (Gawd I feel old).

HEIGHTS were great, but looked like they came from the wrong side of the bible belt, perhaps the buckle? Weird looking but with more energy than most, it was the first band I saw of the weekend where the guitarist decided to climb the speaker stacks, which started a trend for the following day...

MORE THAN LIFE headlined on Sunday, by this point, my tolerance for the bouncey mosh sound had become old, but these guys had a rapturous crowd in the palm of their hands, truly full-on great. 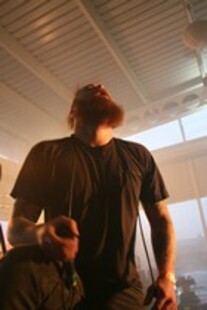 FEED THE RHINO have an amazing frontman, before the second song hits he's been over the stage, speakers and ventured deep into the crowd and has his beer belly out. Their music is mid-paced and swaggering and the confidence they exhibit is justified in the music. I wouldn't feed this particular Rhino any more, its had enough fuel for a long time yet.

THIS IS HELL these Americans remind me of Biohazard, one of them is even dressed in a bandana and vest and goads the crowd into circle pits and the like by suggesting they might be 'posers'. Pity their sound gets really boring, really fast. There's only so many beatdowns you can hear in a day before it sounds like an automated machine clunking out those staccato notes, snoooooooooore.

TRC WHAT IS THIS I DON'T EVEN. What looks like the fallout of an Essex nightclub on stage. One small guy who looks like he has just dropped out of an episode of that show where they debate the finer points of vagina decoration and a tall bald chap who looks like he's chairing a self-help seminar are on vocals in some sort of homoerotic tag team. Look up their video 'Define Cocky' to see what I mean. The music is terrible, but as the tall motivational guru says 'I know we're not everyone's cup of tea, so cheers for sticking around.' At least he knows that, bless.

DEVIL SOLD HIS SOUL used to sound a bit Isis-like back in the day. They still have flourishes now and again but the vocals put paid to any degree of attitude. Like a limp flannel, the nasal, americanised sounds just drag and grate.

MARTYR DEFILED seem to be Lincoln's very own chug chug squeal band, getting the crowd to perform pyramids, walls of death and the like, they pout, pose and jump their way through a brutal set. Making up in enthusiasm for what they lack in variety, it is fun to watch, the singer even quite rightly attacking the idea that clothing companies were there selling for themselves while bands were selling merch alongside. 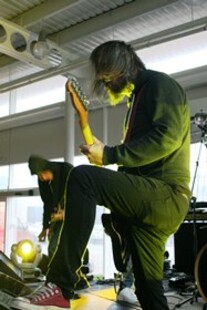 BROTHERHOOD OF THE LAKE are fantastic, their Cursed via Integrity sound does them favours and it feels genuinely nihilistic to these ears, a definite highlight.

DESOLATED are a violent proposition, with a singer who looks like he could kick your collection of pets about with no guilt and a filthy death metal growl, the crowd are fired up for them and they deliver song after song of gruelling, bludgeoning and pissed-off hardcore, nice.

LAST WITNESS are another highlight, with a singer keen on falling over in faux-exhaustion and spitting lyrics with such conviction you fear for his well-being their sound is reflected by the crowd, who surge forward to scream back the words in his face. Tracks like [i]The Void[/] take on a visceral quality live and I'll be checking out their latest album for sure.

DEPARTURES appear exhausted, making their way down from Scotland must have been gruelling but they more than make up for it with some pummeling hardcore and some genuinely heartfelt lyrics. 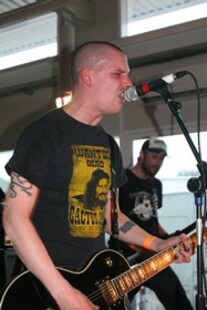 SHIELDS UP are great, with some incredibly high-pitched vocals from their frontman, it makes for a unique sound. More punk-influenced than most hardcore bands this weekend it feels more old school too. Yet another Scottish band proving that I still think I've never come across a bad band from north of the border (although I'm sure they exist).

If anything, this proves that there is diversity within the hardcore scene, but for the love of the riff, can bands start playing more than one note at varying lengths at one tone? It makes for a more exciting set/album, a hell of a lot of this festival my mind was wandering. The bands that stood out did things so much more interestingly that you couldn't fail to be impressed. Next year I'll be there, but selecting the bands I see a bit more rigorously (also missed Bangers, gutted.)