Future of the Left The Plot Against Common Sense 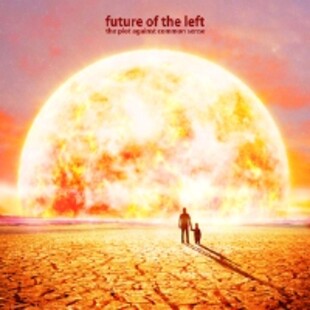 Sometimes you're rewarded by being tardy to the party.

I've enjoyed plenty of Sun Kil Moon and neatly sidestepped the messy and often tedious Red House Painters. Likewise Mclusky, while never dull, missed the mark as often as they hit it but for some reason Future of the Left just work for me. Don't even ask me what I think of Wings. Following on from 2007's mostly excellent Curses and 2009's almost entirely excellent Travels With Myself and Another, The Plot Against Common Sense sees a lineup change and a slight calming of the bands previously jagged sound.

There's the usual smattering of more electronic tracks among the newly beefed up 4 piece rock band sound, like Failed Olympic Bid where Falco sings in monotone about McDonalds and Seb Coe over the colossal insectile lurch of his synth, the closing drones of City Of Exploded Children or the quizzical call and answer burbles of the verse figures of Polymers are Forever. Those craving the angrier guitar drive of Mclusky also have plenty to sink their teeth into. Lead single Sheena is a T-Shirt Salesman sets the tone for these tracks; shorter, punkier and more straightforward in rhythm than the band have been previously. There's still the occasional case where they lapse into odd timings such as the fantastically titled Robocop 4 - Fuck Off Robocop (best closing minute of a song in existence) , and Camp Cappuccino, which comes across like an early Rocket From the Crypt, albeit one where someone shouts "Never underestimate the power of cock" over the verse riff.

Falco has always injected as much humour as bile into his lyrics and Plot... is possibly the wittiest record you'll hear all year. Intelligent and genuinely funny, it's the antithesis of other recent albums I've reviewed such as Dopethrone and Anathema's Weather Systems, and one of the reasons the songs will stick with you. At 15 tracks there was always going to be a few dips in quality. Sorry Dad, I Was Late for the Riots is a swipe at the overprivileged missing the point of the last years disturbances and I can't work out if the rather obvious folky chord changes that accompany the lyrics is another facet of that; a parody of the upper middle class folk singers droning on about the plight of the workers while they accompany themselves with a handful of beginners open chords on a £1,300 Taylor acoustic. In any case, it grates more than it works and is probably the weakest track they've put on an album.

FoTL are what I always thought of as an ideas band; You can listen through the tracks and pick out which musical section was written first, and how the rest of the song hangs off one riff or rhythm.

Apart from Sorry Dad... and a couple of less memorable (but by no means bad) numbers towards the tail end of the album, The Plot Against Common Sense is a great record from a unique, hardworking band. Plus, there's a penguin on the cover. I've already put my pre-order in but there's a stream of the whole thing over at spin.com which I highly recommend you check out here..