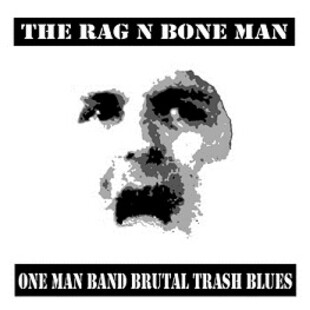 You've got to tip your hat to one man bands, especially the multi instrumentalists who must sweat and toil through every outing powered largely by a strange lonely self confidence. Rag n Bone Man is such a beast, a Scottish soloist portraying gutter blues through what, from what I can tell, includes guitar, drums, harmonica and vocals.

My main point of reference is Man Incorporated, a hardcore punk suited lunatic who I and about 6 other people were lucky enough to see going on a decade ago in Sheffield supporting Five Horse Johnson. Coincidentally, the headline act that day are brought to mind when listening to Rag n Bone Man, through the southern states blues sound. But the distinction found in the Man's attack is sadly lacking here, and it feels a bit generic across the first three tracks. The last track changes tack, and while not great, stands out and is the better for it. It even has an early Seattle grunge vocal feel to it.

It's a cop out to end a negative review to say it'd be great live, and a cop out I've used far too much, but I'm sure this would be a riot in the flesh. As it is, as intriguingly inviting as it might appear, there's nothing for me to suggest you'd listen to this more than the once. Good fun, but if I feel the urge for some solo UK blues, I'd first be reaching for something more accomplished such as Serious Sam Barrett.