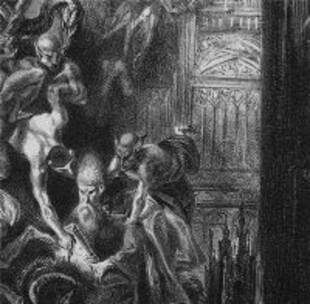 Splitting the difference three ways is usually the best way to either pay bills, divide up winnings or share gloomy doom music.

This Swiss ambient black metal offers very little in the sense of thick, sludgy guitars but more like a drone performed on a practise amplifier miked up. Larger amps needed, then a decent mastering job too.

Following on from the time-consuming drone that the split begins with, the listener is greeted with the guitar drone that lacks conviction to say the least. As the vocals drift in, with the echoing, raspy screams its kind of what you predicted as you realised that you were listening to a little black metal.

What you receive from Profond Barathre is somewhat watered down black metal, the type of band you could imagine buying a model church to burn as opposed to actually carrying out the full act, atmospherics come in a bit later on in their part but is not the type of thing that necessarily works in the setting that they have created with the prior drone.

The cleanly picked, arpeggios that lead the song to its curtains is also drawn out as only expected, whilst the music gets slightly quieter the listener is alerted of which part to avoid should a purchase be made.

The monk-like vocals that also entered at the beginning of the track return, with pretty much the same vigour as earlier. It finally ends following more drone and somewhat terrifying sounds that linger in your skull, but like watching a horror film in the middle of the day, it doesn't quite fit or work.

Rorcal blast in with a barrage of sound that shakes brains, aptly names Vilavege (end of the world, doomsday etc.) the intensity of their opening riff can only be measured on the Richter scale, blasting in like this and letting in roll for a fair few bars before stopping dead to allow texture similar to their intro which brings the screaming in like a swarm of hornets into the listeners ears.

This type of sound is not an easy one to get right, as Profond Barathre proved previously, it required enough depth to drown every human of the cloth in, the discordent, speed picking works as it brings itself down into thunderous drums and riffs that eventually switch times.

Its ideal church burning music, clocking in at around 10 minutes, you'd best do your corpse paint before you put this on and arm yourself with a jerry can.

Last but not least, Malvoisie, 1291 begins with what I assume is a demon narrating over a somewhat up-beat drum pattern which eventually slows to let the demon scream, odd indeed. Unfortunately I can't quite grasp what they are trying to achieve with this, I mean, unless you sample this type of sound you'll never manage to genuinely scare a listener.

If this is tongue in cheek then they have succeeded in getting a laugh out of me but I somehow doubt that they are shooting from this angle as a mild drone carries on, its as low as possible in the mix and is barely noticeable while the two demons argue and squabble over the top.

It would appear that the only shining light on the three way is Rorcal, you can probably do without the other two.