The Bucky Rage Cut 'Em Down 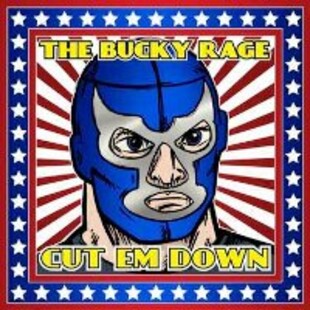 So turns out this band are from Scotland, who knew? With a name like that I should have guessed, but they sound like they are from the wrong side of the Southern swamps.

With a heady mix of surf rock a la Man or Astroman?, The Bucky Rage have a cool line in bluesy, mean rock. Some of it reeks of Nick Cave's Grinderman and some of it brings to mind the more 50s rock and roll of bands like The Reverend Horton Heat. Either way, you can imagine this fitting in well on either a cool indie label in the 90s or part of one of those all-encompassing Epitaph collections from that era too (think they were called Punk-O-Rama?).

The subject matter is mean and cool, the sound of regret being dissapated with cold beers and a good time, I imagine these are a riot live, from the looks of pics online, they wear Mexican-style wrestling masks, but not in a whacky way it seems, I'd say the music matches this southern attitude and apparel well.

It's all over rather quickly, but this works, it's a bite-sized chunk of rumbling bass, feedback-flinging guitar and vocals delivered at a frenzied pace in that same crackly phonecall way mad and dark indie rockers The 80s B-Line Matchbox Disaster used to, which creates an old B-Movie style effect. You can imagine this playing in a trashy bar in one of those gaudy 60s technicolour films you see on a weekday on Film4.

Investigate if you want a more tuneful Dwarves or Zeke in your life, I know I'll be blasting this on long drives for the forseeable.

Forums - Reviews and Articles - The Bucky Rage - Cut 'Em Down