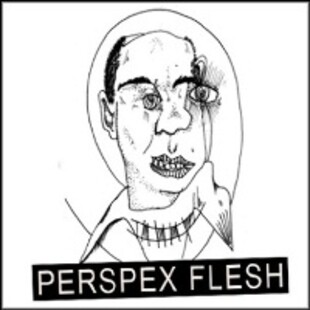 This is a paint-stripping, forceful demo from Leeds-based Perspex Flesh.

It's all quite fast, you can imagine them ploughing through this material in a pub backroom, but it doesn't sound angry enough. The singer is wearing a Siege T-shirt in their blog pic, but it doesn't ever get to that level of seething hatred at all.

The music is too mid-paced and well, posi, that nothing adds up. The vocals do sound impassioned, don't get me wrong, but it has more in common with the weird, throaty thing that bands like Benumb love so much.

It all goes a bit 80s at points too, 'Lucid Dreams' has that edge feel to it at points, which is no bad thing, but I wish I could tell what the lyrics were, it would make this band a bit more easy to pin down. As far as I can tell, it's almost Swans-esque self-loathing and a particularly frothy bile that's being espoused.

'Selective Hearing' is something anybody can get angry about, and the pace does pick up a bit for the final track, but it sounds like too much effort for the whole band at times, like they've eaten a bit much and have wind. This means it's a little sloppy but that's the way some people like it, someone get them riled up before they next go on stage or enter a studio please, they need to sound more pissed off. Tell the singer you think Siege were shite, that might do it.