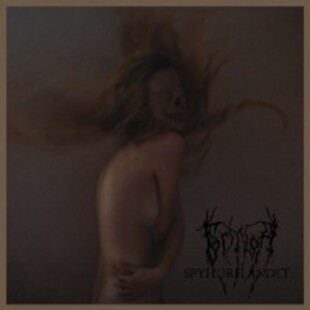 Formloff are a black metal duo from Norway and play a drawn out take on the genre.

Bringing to mind the classics of the genre, it drips with that same nihilistic filth and frustration that early Darkthrone does, but with a modern sheen on it too a la Enslaved.

Having said that, there's experimentation on display here that will have even the most wind-battered and world weary black metal fan interested. Indeed, even within first track 'Det dritet som renner ut i Ua' there's enough twists and turns to fill the average black metal album. One moment it's stark, lonely plodding, the next they are at full pelt, the vocals at full scream rather than embittered grumble.

There's disturbing parts on here, the vocalist is truly multi-talented, he has that throat-ripping black metal scowl that has become standard, but also makes himself sound like he is crying at times, singing at others and the full-on death grunt makes an appearance too. Formloff are also brave men, willing to chuck in whatever they want, when they want. There's the rat-a-tat of milatritstic drumming one moment, the wide expanse of funeral doom the next so it's a fascinating listen and is particularly impressive when you consider there's just two frostbitten types at work here.

The experimental nature of this band is probably best exemplified in the bonkers 'Mig ot drit' which veers into the blastbeat-heavy area of black metal but somehow sounds like it was recorded underwater, giving it an unusual sound. The keys (yes they make it in there too) sound like a 70s prog band has bust into the studio to jam momentarily and it descends into a maelstrom of chaos soon after with some horrid feedback thrown in for good measure.

This is a great example of what can be done with a genre so many write off for being formulaic or staid, Formloff have more ideas than you might imagine...

The entire album is streaming here.