The Melvins The Bulls & The Bees EP 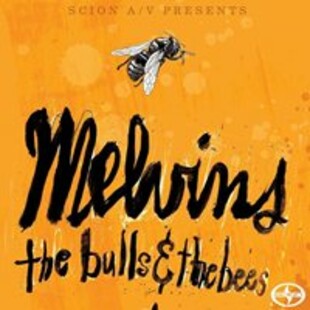 Or to give its full official title ‘Scion A/V Presents: The Melvins- The Bulls & The Bees’.

Scion, for those of you who don’t know, is a car range from Toyota and the A/V project sees them aligning themselves to a slew of musical styles by sponsoring gigs, festivals, films and recordings . I for one am not at all comfortable with the whole notion of corporate sponsorship of bands/ music projects. A quick bit of research shows that the Melvins are far from being the only band to be involved in this project, just the first to register on my radar. Previous bands involved include Yob, Municipal Waste, Magrudergruind, Meshuggah, Reigning Sound, Exodus, Integrity (oh, the irony…) and others from genres such as hip hop and dance. I’m not going to go on an extended diatribe about the evils of multinational corporations; this is after all a music review for a music site, I just get a bad feeling when big business (no pun intended ) cosies up to bands/ artists/ filmmakers. There must surely be some ulterior motive behind the whole project, not just a PR exercise to provide humankind with lovely free downloads of tracks from a plethora of respected bands.

Anyway, onto the music. The Melvins are pretty much a love ‘em or hate ‘em band and despite being a little underwhelmed by some of their recent releases, I’m still firmly in the love ‘em camp.

This free to download EP features 5 tracks that see Buzz & co in familiar territory, favouring the rocking side of their character rather than the experimenting/ arsing about side which I think sometimes works and sometimes grates. Here they’re pulling another cluster of great riffs out of their seemingly endless supply but with a few choice flourishes of their creative side to stop it getting too predictable..

Opener ‘The War on Wisdom’ kicks off in typical catchy head banging fashion, with a tasty groove begging for a bout of dandruff swapping, pausing for a drum fuelled breakdown before drifting into a nicely picked out guitar/ vocal passage and big fuzzy bass riffing from Jared.

‘We Are Doomed’ is a slower paced follow up, which alternates between quieter picked out verses and louder, group vocalled interludes before heading out on a customary Melvins twisted pizicatto heavy guitar excursion. Next up ‘Friends Before Larry’ has more of the experimental/ odd noises getting a look in, starting off like a sci-fi soundtrack giving way to a bass heavy synth drone, layered up with various guitar effects, distant vocals and slow stop/start drum patterns. Although this is not as rocking as the previous two songs, it’s an interesting and memorable tune which should remind the cynics amongst their detractors (and followers) that the Melvins can happily twist the genre without getting self indulgent and tedious.

‘A Really Long Wait’ comes next, offering a gentle string-backed interlude, it’s quieter approach acting to provide a more unsettling and spooky ambience to the sound, the distant vocals adding to the sense of dream-like unease; again I get the feeling that this would work very well in an atmospheric horror or concept sci-fi film. I can’t help wondering why the Melvins have never explored this medium further, maybe opportunity will come knocking soon?.

Proceedings are neatly wrappd up by closer ‘National Hamster’, bringing us firmly back into rocky riff territory, although at a fairly relaxed pace. This is the Melvins doing tuneful rather than ugly, the trebly lead signature adding a pleasant hook to proceedings. Frustratingly, the song does sort of fizzle out which provides a slightly disappointing ending to a great little EP.

Misgivings about the money behind it aside, this is a tasty little freebie. Download it here.

Forums - Reviews and Articles - The Melvins - The Bulls & The Bees EP