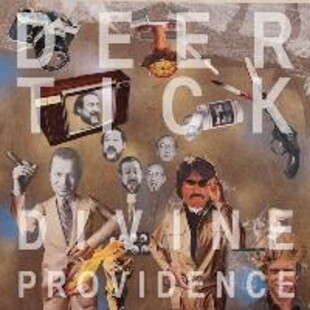 Well, I’ll put my hands up, I know nothing about this band; they could be keen new upstarts or seasoned veterans, ex members of anyone from Blue Cheer to Agoraphobic Nosebleed for all I know.

So, with an open mind and open ears I gave Deer Tick a first whirl…

Divine Providence showcases a band who tread the well worn path of boozy bar-room rock, basing their sound around the early seventies Rolling Stones/ Faces blueprint favoured by whisky drinking, Marlboro puffing revivalists ever since. The only question is whether Deer Tick are approaching the Keef/ Mick/ Ron template from the gutter-casualty perspective of the likes of Dogs D’Amour and early Black Crowes or the more earnest blue collar pseudo-Springsteenism of The Hold Steady. Elements of both vie for attention throughout at the expense of a strong identity of their own.

All the expected cliches are present and correct with tunes of drinking, smoking and having a broken heart in the gutter. Maybe they’re smartly dressed bank clerks in real life but in the absence of band photos I see Jack Daniel’s T-shirts, old Levi’s and tattoos of naked women in my mind’s eye.

The tunes are catchy enough to stick in the memory straight off but I can’t help thinking it all seems a bit forced; at times, such as Let’s All Go To The Bar, it’s as though they’re trying to be slightly shambolic to add authenticity to the booze-hound image they’re so keen to portray.

The singer’s voice has an early Alice Cooper meets a more mainstream Tom Waits gravelly tone which suits the music perfectly and some tunes such as opener The Bump add a bit of glam stomp meets off-kilter, honky-tonk (wonky tonk?) boogie but to be honest it’s all been done before many times, much better.

I’m sure these tunes would provide an apt soundtrack to a night on the beer in some scummy shithole bar in the good ol’ U.S of States (no chance in post-smoking ban UK; these sort of bands couldn’t possibly play without a smouldering tab stuck in their headstocks). On record I’m not so sure.