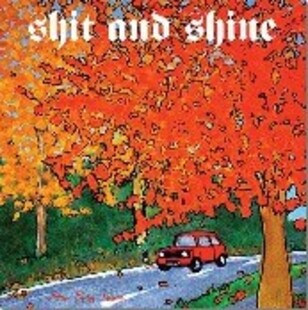 Riot Season have perhaps the best ear in the UK for utterly horrid sounds these days.

Home to the likes of Hey Colossus, Ultraphallus, Todd and Dead Elephant among others, it's one for audiophiles of the noisier end of the spectrum.

Shit and Shine have of course been going for years and this is another messed-up release that is both devastatingly fuzzed-up and unpleasant, but warrants multiple listening.

At just 7 tracks and limited to 500 vinyl-only copies, is it worth picking up? Well, that depends if you like what sounds like pixelated bombs dropping through your speakers while someone abuses a speak and spell so bad you can only identify it through dental records, if speak and spells had teeth.

Shit and Shine have always been awkward, but this is a step to another level. It's like wading through thick gunk with a Wolf Eyes album on a slowly dying cassette walkman, the headphones the other side of a smelly, damp balaclava.

Sometimes they trick you into a false sense of security, the lounge jazz/muzak of the title track sounds like several charity shop records on downers, being played on somewhat damaged equipment, all with subtle percussion floating around in the background, but they soon get back to the static and intimidation with the feedback and circuit-bending of 'Woodpecker' which is all clattering beats and phasers set to 'fun'.

The ten-minute 'Rodeo Girls' has loops of distortion, Indian ragas, multi-layered percussion and swathes of keys floating all over it, like murky pond water with a oily film on top, ugly but beautiful.

This is the midway point between ambience and outright disgust, if you revel in dirty electronic noise and a sense of lucid sickness, then this is the record for you, it's confusing as much as it is repulsive, but you'll be back for more.