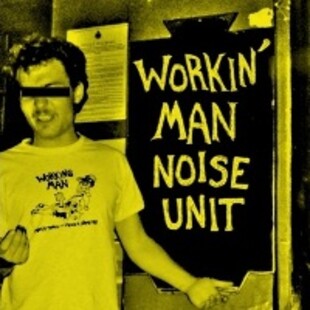 There's a title to get your head around, this is a filthy, rumbling mess of a release.

Essentially a blues band stuck on a conveyer belt while machines crank and buzz around them, WMNU pummel their way through feedback and a layer of electronic attack to present a psyched-up workout in the vein of nobody else.

Screeching guitar amps threaten to drown out anything else as the drums pound their way through your speakers and the poor soul tasked with vocals sounds psysically exhausted and desperate as the live recording continues.

With so much going on, you would think it would be unlistenable, but they do it with such a sense of pulsing purpose, it's head-spinning stuff and you end up in some sort of post-future fugue.

This is heatsick, tight and unpleasant stuff, but it all so sounds so cool, like an effortless meander into a factory, turning on all the machines and then playing an old Melvins tape that's been kicked around your car's floor for years at full whack through a battered old ghetto blaster.

You can hear the release here, but I think there's also a tape available, which might be worth tracking down, if only to add to the analogue and visceral sound already on display. This sounds more Spesh than Stella to these ears, have a listen and see which gassy can it makes you think of.